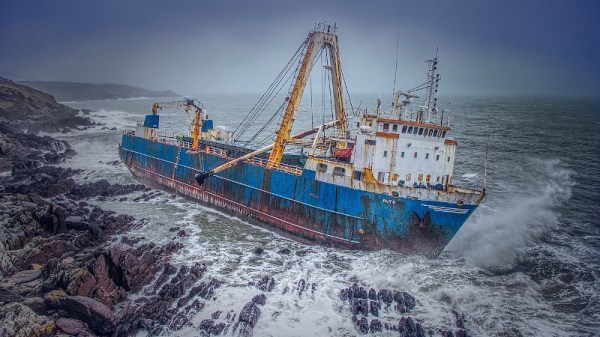 I’m writing from a cozy farmhouse just outside of Oxford, UK where we are slowly emerging from a particularly intense Atlantic storm. Some areas have widespread flooding, while fallen tree branches and damaged roofs are countrywide. Our neighbours in the Irish Republic are first in the path of these storms, and receive an especially strong pasting.

In the news following the storm is a merchant ship that was washed up by this storm on the coast of County Cork. The MV Alta  is a nearly 2300t and 77m (just over 253 ft) freighter that had been abandoned in 2018 south of Bermuda after a mechanical failure had rendered it incapable of navigation. Its crew had been rescued by the US Coast Guard, and since then — apart from a brief sighting in mid-Atlantic by a Royal Navy polar research vessel — it had passed unseen as a drifting ghost ship before appearing on the Irish coast.

In a very literal sense it had dropped off the radar, but the question for us is how? With the huge array of technological advances in both navigation aids and global sensing available at the end of the 21st century’s second decade, should that even be possible? It’s worth taking a while as land-lubbers to look at how ships are tracked, to try to make sense of the seeming invisibility of something that is after all pretty large and difficult to hide.