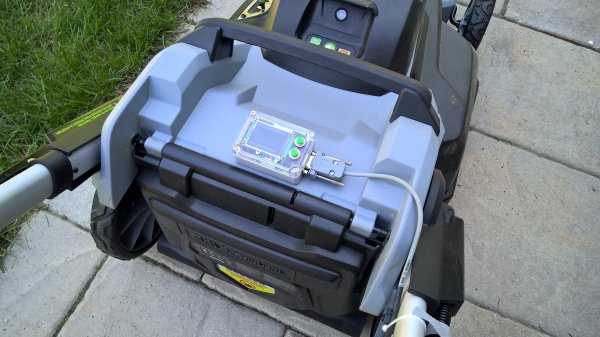 Okay so this IOT is getting a bit out of hand. Introducing the world’s first(?) tweeting, internet connected, lawnmower.

[Michel] recently bought one of those new-fangled cordless lawn mowers by EGO. It runs off a 56V lithium ion battery pack, and apparently, works pretty well. Since it has plenty of on-board power, he decided to strap a 64MHz PIC18F25K22 to a ESP8266 and connect it to the internet. That part number has been taking the world by storm and it’s totally freaking awesome. The ESP8266 is a tiny WiFi module that is controllable over a serial port — and it only costs $5. Hello IOT-everything.

Anyway, to avoid voiding his warranty, [Michel] using non-invasive sensors to collect data — A series of hall effect sensors and magnets to be exact. One detects when the cutting system is engaged, and another magnet and sensor pair counts wheel revolutions. In the end, this gives you data on how far you pushed the mower, how long you spent cutting, and how long you were out there. When the job is done, you have the option to push a tweet with your stats. Woo!

He does admit, the tweeting feature is more there just to annoy his friends.