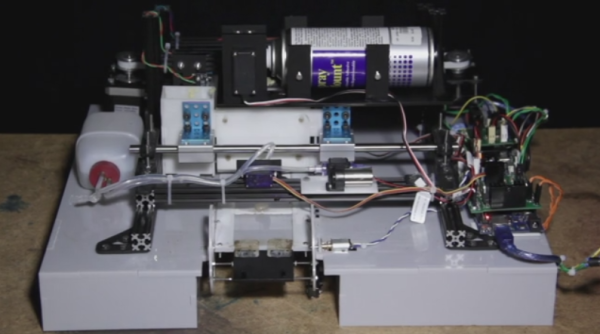 Good morning, Mr. Hunt. Your mission, should you choose to accept it… blah blah blah… This post will self-destruct in five seconds.

This is [Diego Trujillo Pisanty’s] latest project dubbed “This Tape Will Self-Destruct“, and it’s a fully functional small scale printer, whose media catches on fire immediately after printing. Beyond the obvious Mission Impossible connection, you could also think of it as real-life snapchat — just throw a webcam on there and some faxing capabilities…

Apparently [Diego] was inspired to build this machine after the BBC reported that a Kremlin security agency was upgrading the office with typewriters in attempt to reduce privacy leaks from computer hardware, in fear of WikiLeaks and [Edward Snowden].

It is an art piece (the horror!) but is actually quite the piece of hardware. So unfortunately, like most art pieces, the artist doesn’t give much detail on how it works, because that would ruin the illusion of the project… or something. Still, it’s an amusing project. Video below.