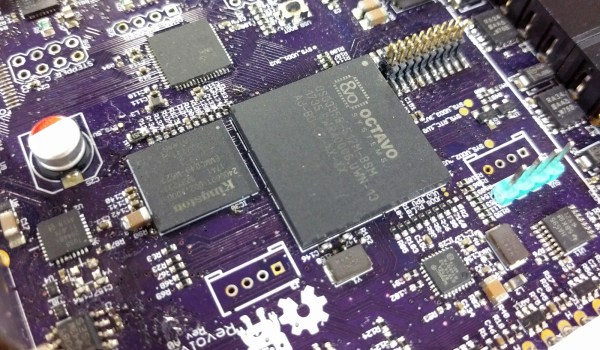 It’s understood that 3D printers and CNC machines need to control motors, but there are a few other niceties that are always good to have. It would be great if the controller board ran Linux, had support for a nice display, and had some sort of networking. The usual way of going about this is either driving a CNC machine from a desktop, or by adding a Raspberry Pi to a 3D printer.

The best solution to this problem is to just drive everything from a BeagleBone. This will give you Linux, and with a few motor drivers you can have access to the fancy PRUs in the BeagleBone giving you fast precise control. For the last few years, the Replicape has been the board you need to plug a BeagleBone into a few motors. Now, there’s a better, cheaper solution. At the Midwest RepRap Festival this weekend, [Elias Bakken] has unveiled the Revolve, a single board that combines Octavo Systems’ OSD3358 ‘BeagleBone On A Chip’ with silent TMC2130 motor drivers from Trinamic. It’s an all-in-one 3D printer controller board that runs Linux.

The specs for the Revolve are more or less exactly what you would expect for a BeagleBone with a 3D printer controller. The main chip is the Octavo Systems OSB3358, there are six TMC2130 stepper drivers from Trinamic connected directly to the PRUs, 4 GB of eMMC, 4 USB host ports, 10/100 Ethernet, 1080p HDMI out, and enough headers for all the weird and wonderful 3D printers out there. The software is based on Redeem, a daemon that simply turns G-code into spinning motors and switching MOSFETs.

The price hasn’t been set, but [Elias] expects it to be somewhere north of $100, and a bit south of $150. That’s not bad for a board that effectively does everything from online printer monitoring to real-time motion control. There’s no date for the release of this board, but as with most things involving 3D printer, the best place to check for updates is Google+.