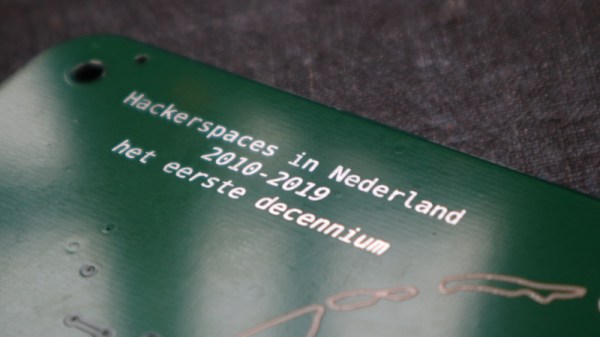 A couple of months ago I wrote a piece about the evolution of hackerspaces, and mentioned that I’d be attending a party for a hackerspace birthday. As I write this that party was last weekend, and it was celebrating both the birthday of RevSpace in the Hague, and the tenth anniversary of hackerspaces in the Netherlands. After a relaxing ocean cruise across the North Sea and a speedy train ride I found myself in RevSpace with a bottle of Club-Mate in my hand, hanging out with not only the locals but a selection of others from all across northwestern Europe and beyond. RevSpace is an exceptionally well-organised hackerspace with a large membership, so there was plenty to talk about and a lot of interesting projects to look at.

There was a short programme of talks in Dutch, covering hackerspace history and interviewing a panel of hackerspace founders. I am told that these may make their way online with an English translation in due course, and should be worth looking out for. Then there was an epic-scale barbecue, an old-school rave with Gameboy chiptunes and analogue synth EDM among other delights, and the chance for an evening’s socialising with the rest of the attendees. END_OF_DOCUMENT_TOKEN_TO_BE_REPLACED This was the Netherland’s largest hackerspace — Until Hack42 acquired a military base in Arnhem… More on that later though. RevSpace is a 24/7 hackerspace located in the basement of a large industrial building turned workshop/studio. They have lots of space, but could even use more as they continue to grow! The photo above is from the Tuesday night BBQ – a weekly event that has happened every Tuesday for almost 2 years straight! It’s the social night and it draws many people out to share in good food, good company, and good times.

Special thanks to [Mark] for picking us up from the train station! He’s the fellow in the bottom right of the photo, and also happens to be one of the board members of RevSpace!