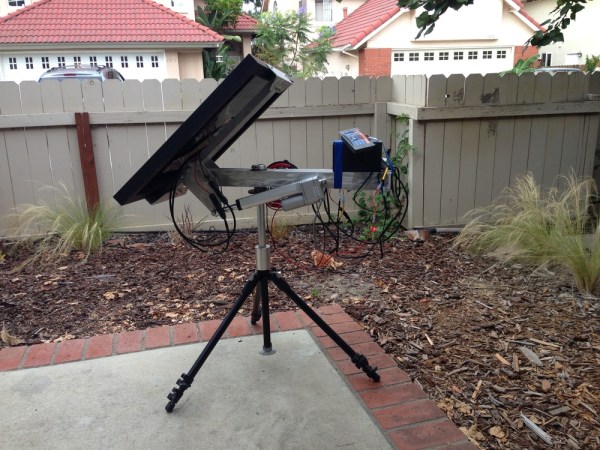 Let’s face it — solar panels still aren’t that efficient. So why not pump as much juice out of them as possible? Building a 2-axis solar tracking unit can increase daily power output by around 30%!

[Jay Doscher] had his power go out back in 2011, and even though it was only for 12 hours, they realized how ill-prepared they were to deal with a power outage. Food was spoiled, flashlights were dead, candles were sparse… they needed to be prepared better for the next time this happened. This spawned one of [Jay’s] longest running projects on his blog Polyideas.

His goal was to build a fully automated solar tracking unit that could be setup anywhere, and automatically track the sun to ensure optimum ray catching. It makes use of a 12V gear reduced motor to provide panning, and a linear actuator with positional tracking to control the tilt. To track the sun he’s got a digital compass and an Adafruit Ultimate GPS breakout board. To control it all he’s using is an Arduino UNO, but he has been through multiple iterations including his first with a BeagleBone. It’s a very slick and well engineered system and [Jay’s] hoping to spread it around the world — the entire thing is open source. What a guy!

It’s not quite complete yet, but he’s got an amazing build log and a GitHub repository  filled with info — plus the following video showing it off in its current state!