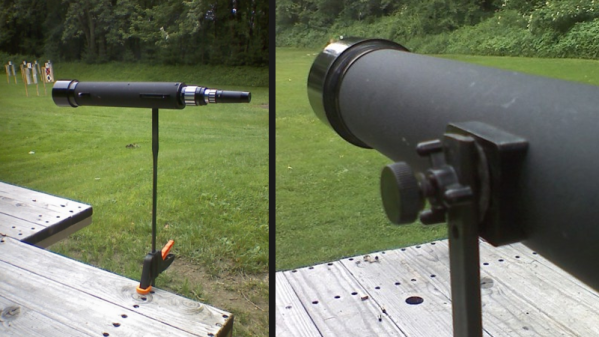 One of the big bottlenecks in target shooting is the scoring process. Even if it’s not a serious match, it’s still important to know where holes have landed because it’s important feedback on technique and performance. One way to see hits on a target without leaving the firing line is to use a spotting scope, which is really just a kind of telescope optimized for getting a sharp view of a distant target. Usually they are mounted on tripods and optimized for seated use, but [Stephen Thone] came up with a clever hack for more comfortable use and mounting that works better for him while engaging in bulls-eye shooting from the standing position.

[Stephen] took a ratcheting bar clamp and drilled a few holes near the end of the bar. Using these holes, the spotting scope is mounted directly to the bar and the clamp grips a shooting table or bench in place of a stand. [Stephen] also put a 90 degree twist in the bar so that the clamp and scope could be oriented perpendicular to one another. The result is a quick and easy-to-use mounting solution that, unlike a tripod, doesn’t eat up precious table space. Stability may be inferior to a tripod, but it’s serviceable enough that other shooters showed up with their own versions the week after [Stephen] used his. After all, target shooters tend to be DIY types with an interest in both low-tech hacks like this one as well as higher-tech projects like rifle-mounted sensors.