Students at the University of Illinois at Urbana-Champaign have a brain-computer interface that can measure brainwaves. What did they do with it? They gave it to Alma, a golden labrador, as you can see in the video below. The code and enough info to duplicate the electronics are on GitHub.

Of course, the dog doesn’t directly generate speech. Instead, the circuit watches her brainwaves via an Arduino and feeds the raw data to a Raspberry Pi. A machine learning algorithm determines Alma’s brainwave state and plays prerecorded audio expressing Alma’s thoughts.

END_OF_DOCUMENT_TOKEN_TO_BE_REPLACED

There are hundreds of modern, retrocomputing projects out there that put ancient CPUs and chips in a modern context. The Neon816 from [Lenore] is perhaps one of the most impressive projects like this we’ve seen. It’s a classic system in a modern form factor, with modern video output, mashed together into a MiniITX motherboard.

The powerhouse of this computer is the Western Design Center W65C816 CPU. This is the second generation of the venerable 6502 CPU, the same chip found in everything from the Commodore 64 to the Apple II to the Nintendo Entertainment System. The 65816 is a 6502 at start-up until you flip a bit in a register, at which time the signalling on the address bus becomes much weirder. We’ve seen some single board computers based on the 65816 before and The 8-Bit Guy has a few ideas to build a computer around this CPU, but for the foreseeable future work on that will be trapped in development hell.

Of note, the Neon816 will feature DVI output (I guess technically you can just run the analog signals through the connector), a PS/2 Joystick input, two Atari / Sega joystick ports, MIDI in and out, a PC-style floppy disc connector, and a Commodore serial bus. It’s a hodge-podge of classic retrotainment, all in a single MiniITX motherboard.

The key other feature of the Neon816 is an FPGA, specifically a Lattice XP2 8000 LUT chip that is used for video and audio. This is combined with 1MB of main RAM (looks like a simple SRAM) and 128k of Flash storage for the ROM. There’s also an SD card in there for storage.

Right now, [Lenore] is populating the first prototype board, and we can’t wait to see some video generated with this impressive little system.

We’re all familiar with the subtle sounds of electrical equipment present in daily life. There’s the high-pitched whine of a CRT, the mains hum of a poorly isolated audio amplifier, and the wailing screams of inductors. Typically these sounds go unnoticed unless something is malfunctioning or otherwise wrong. However, Quiet Ensemble decided to capture these noises and turned them into a performance they call The Enlightenment.

The basic setup consists of a series of lights, most of which are theatrical in nature. There are spotlights, a series of neons, and even a few bright strobes. Copper coils are used to pick up the stray electrical noises generated by these lights in operation. These noises are then fed to mixers, amplifiers, and other audio equipment to allow the performers to control the audio as they wish.

The end result is a mechanical, and at times, brutal soundscape that wouldn’t sound out of place on the Homeworld soundtrack. Flashing strobes contribute rhythm while the rest of the lights lend their droning and whining to fill out the ensemble.

If it’s a little too niche for your tastes, the Triforium may be more to your liking. Video after the break.

END_OF_DOCUMENT_TOKEN_TO_BE_REPLACED 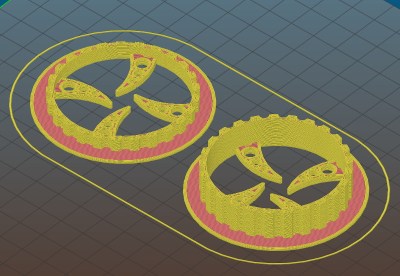 END_OF_DOCUMENT_TOKEN_TO_BE_REPLACED

Blowing bubbles is a pastime enjoyed by young and old alike. The pleasant motion and swirling colors of the bubbles can be remarkably relaxing. With the right tools and techniques, it’s possible to take striking photos of these soap film phenomena, and that’s exactly what [Eric] and [Travis] did.

After beginning with a robotic arm and a computer fan blowing bubbles, the project moved towards a simple stepper motor setup. A thin frame is lowered into a solution of soapy water, then brought back up by the stepper motor. The resulting soap film is held in front of a black background and carefully lit with a softbox light.

Lens selection is critical for this sort of work – in this case, a TS-E 50mm Macro f/2.8 lens was the order of the day. [Eric] shares other tips for taking great shots, such as adding sugar to the solution to make the soap film last longer, and using a modified speaker to help “paint” the surface of the films.

The resulting images are beautiful examples of the art, showing vibrant colors from the interference patterns created by the light. [Eric] has done a great job of clearly documenting the development process and the final results, making it possible for others to recreate the project elsewhere.

We’ve seen other soapy projects before, like this automatic bubble blowing machine. Video after the break.

END_OF_DOCUMENT_TOKEN_TO_BE_REPLACED

It’s not particularly easy to buy small explosive charges. At least, it’s not in the UK, from where [Turbo Conquering Mega Eagle] hails. But it is surprisingly easy to get your hands on one because most people drive around with one right in front of them in the form of their car airbag. In a burst of either genius or madness, we can’t decide which, he decided to use an airbag charge to launch a projectile.

As you can see in the video below, he launches straight into dismantling the centre of a Renault steering wheel before seemingly abandoning caution and taking a grinder to the charge inside. It’s a fascinating deconstruction though, because it reveals not one but two differently sized charges separated by a space which appears to contain some kind of wadding.

His projectile is a piece of steel tube with a turned steel point, spigot launched over a tube placed in front of a breech in which he places the charge. The launch tube has a piece of metal welded within it, he tells us to render it legal by being unable to launch a projectile from within it. Upon firing at a scrap jerry can it has enough energy to easily pass through both its steel walls, so it’s quite a formidable weapon.

He assures the viewer that with the spigot-launched design he’s not breaking the law, but we’re not sure we’d like to have to explain that one to a British policeman. He does make the point though that while it’s an impressive spectacle it’s also quite a dangerous device, so maybe don’t do this at home.

If ripping airbags to pieces isn’t your thing, how about making one from scratch?