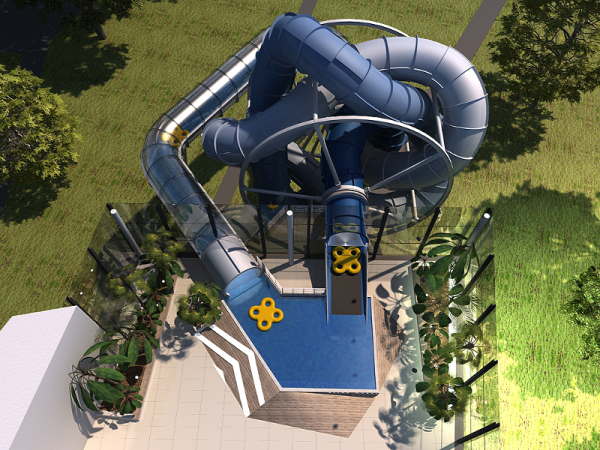 This might be German engineering at its funnest. [Wiegand Maelzer GmbH] have created a new type of amusement park ride that combines the thrill of a water slide with the gentle revolutions of a Ferris wheel.

Inspired by the wish of a young Swiss boy in 2012, the whimsical feat of engineering known as the SlideWheel was realized this year. This is isn’t quite the giant sloshing drowning machine it appears to be on first blush, though. It begins and ends at the same shallow pool, where three- and four-person rafts are lifted into the ride by conveyor belt. What happens next is difficult to describe. It’s easier just to watch the first-person video below that demonstrates the pendulum-like motion that comes from floating while rotating.

SlideWheel moves at a modest 3 RPM, though this can be adjusted. Travel speed through the tube maxes out at 40 KPH/ 25 MPH, but will vary depending on the raft’s location, the position of the wheel, and gravity. The ride can handle up to three rafts at a time and delight 720 people per hour. A trip through the tube lasts a mere two minutes, but all those who’ve tried it say the experience seems much longer. [Wiegand Maelzer] have already received a few orders and are working on a dry version for malls and indoor amusement parks.

Not enough of an engineering feat, you say? Here’s a car-juggling robot.