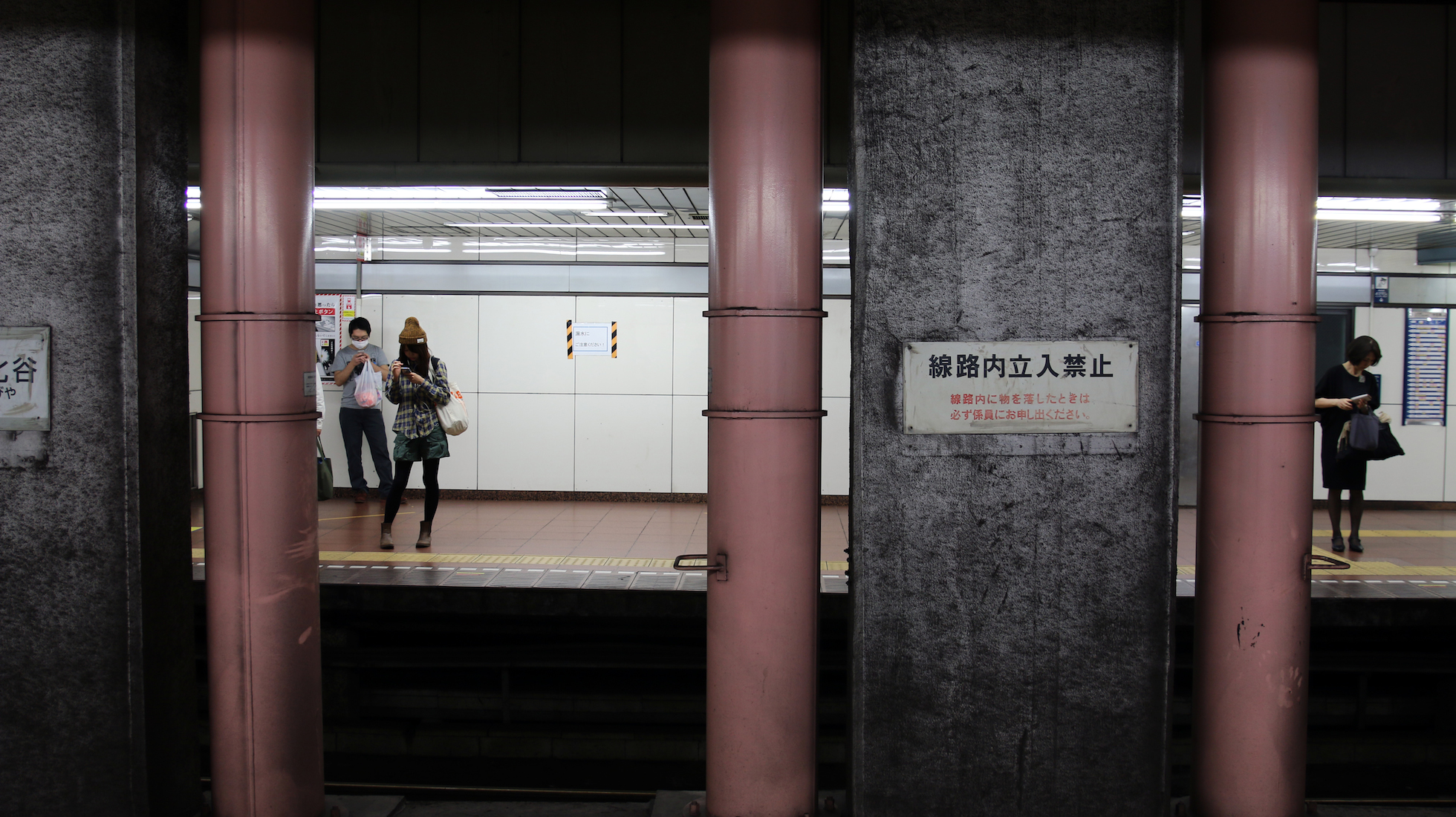 It’s as if you were hoping to land somewhere on the opening pages of Neuromancer, but ended up in the middle of a Studio Ghibli movie instead. While all the neon and tech gimmicks seemed to be there, the future they’re portraying feels strangely anachronistic — like a dream from the distant past. Something straight off Nintendo or Sega Corp drafting tables from the mid-80s and decades later, still showing no signs of decay. Everything is perfectly tight, clean, well-preserved, and smiling with a distinct Kawaii touch. A retro futuristic utopia.

It’s certainly not what I had hoped for, but the whole thing quickly grew on me. I began to feel at home…

The next day, we got on the Metro and went straight to a place we intentionally skipped the night before – Akihabara Electric Town. There we met with [Emery], [Taylan], [James], [Shingo] and [Mariko] from Tokyo Hackerspace and they gave us the grand tour. It was spectacular.

The place is a sort of Geek Wonderland where every corner hides a place you never came looking for but can’t resist getting in. You might come to Akihabara searching for electronic components for your latest project but leave as Train Otaku, 1998 Sega Dreamcast owner with a bag full of games, or falling in love with yet another obscure Manga, which will end up consuming a better part of your life.

Cosplay characters are roaming the streets and moe girls are advertising all sorts of maid cafes. Electronics are everywhere, across a large number of small places, each with a slightly different focus. One of the shops we came into was specializing in electronic components and books about the occult!? Cthulhu loves the smell of burning silicon.

Hopefully, our video with the amazing Tokyo Hackerspace crew will give you a better sense of what it is like to be a hacker living in a place like this. 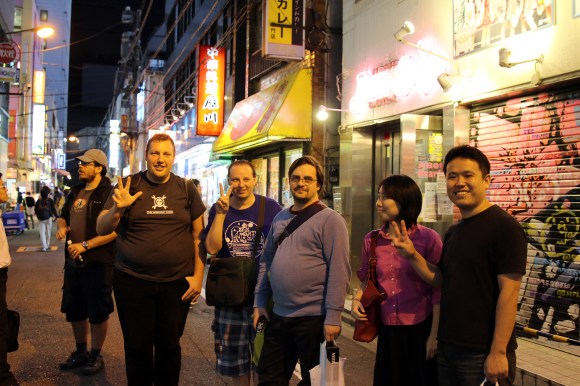 Having spent most of the day navigating the Akihabara maze and feeling depleted by all the sensory overload, we were more than excited when [Shingo] and [Mariko] invited us to visit their home studio for some downtime and beers. It’s located in Akihabara, walking distance from all the main attractions, and it’s a hacker’s dream. The apartment doubles as a mini fabrication lab, with husband-and-wife science-geek team relentlessly working on new projects and ideas.

We already knew about [Shingo’s] Levistone box, but the place was packed with a history of hacks… from his early aerospace work, to more conventional projects such as random Arduino shields, all the way to his latest DNA Amplifier hardware project based on OpenPCR. They’re incredibly friendly, and their place is always open for local hackers in need of some fab gear. 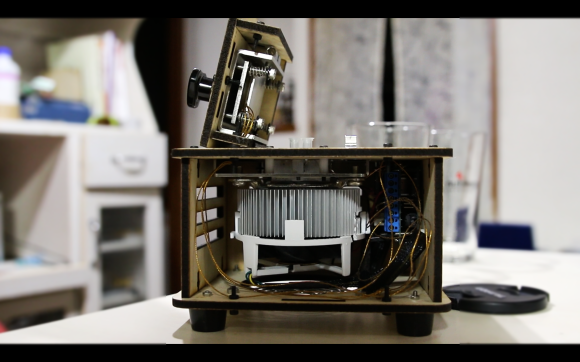 The last stop for the day was Tokyo Hackerspace. It was late Saturday night, and the place was closed, but we still wanted to take a glimpse. So we hopped on the JR line to Nogizaka station with [Taylan] and [James], and they opened it up for us. It’s located in the middle of a residential neighborhood in Central Tokyo and given the rental prices and a relatively small hacker community, it’s a pure miracle such a thing exists in the first place.

We quickly recognized the famous membership fee/donation machine and had some fun with it. Our favorite piece of gear was a cool laser cutter obtained as a stretch goal for their Indiegogo campaign. Our favorite project was a Kit Vending Machine – an old cigarette machine converted into a kit and project dispenser.

Regular, weekly “Open House” meetings are on Tuesday evenings, so if you plan on visiting, that’s the time to be here. 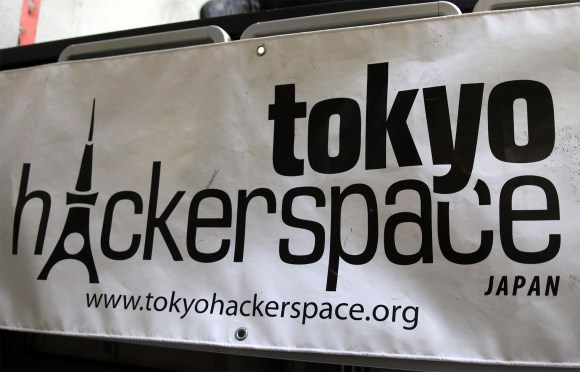 Sunday came quickly, but we still had a bit more time on our hands, so we picked another item from [Akiba]’s list – 3331 Arts Chiyoda and hit the JR to Yushima station. It was totally worth the trip.

3331 is an abandoned school converted into a “creative” space that “brings together cutting edge art with the familiar everyday.” Rarely would you find such a diverse mix of interesting things in a single location. On the first floor, we attended what turned out to be a theatre play for children (in Japanese, of course), resembling the real-life rendering of Dragon Ball Z. Right next to it was a big contemporary art exhibition featuring an interesting installation art piece, controlled by relays triggered by the vision module processing a revolving sheet of paper with Enso-style drawings on it. On the same floor, a massive Dream House-style sound art installation called “DJ John Cage.”

The third-floor hides a cool little place called “Soldering Café,” an open space where people interested in electronics can share tools and work on their projects. It’s also a great place for hackers to meet and collaborate with all the crazy artists who are roaming the halls of 3331. Next to it is the SoftBank Robotics Corp. Workshop, where developers can have endless hours of fun, writing the control code for SoftBank’s humanoid robots.

In the basement, a long line of Anime Otaku, patiently waiting to enter the Sakka Zakka new artist showcase. 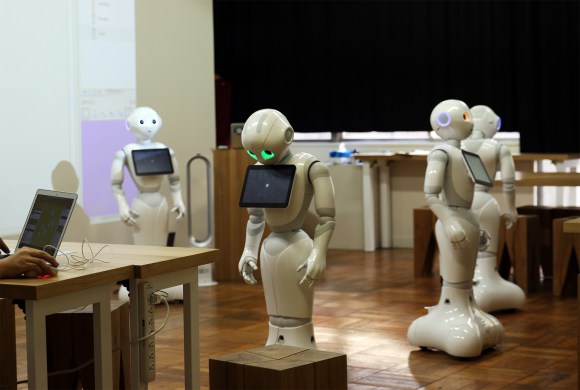 The clock was ticking, and it was almost time for us to leave, but I felt bad we didn’t get a chance to sample the famous Akihabara nightlife. [Akiba] recommended checking out Club Mogra, supposedly an electronica/chiptunes otaku/nerd culture central, but we were supposed to leave the town that night, and there was no way we could make it happen. Still, I looked up the club’s website, and it turned out there was a show starting at 3PM. I couldn’t fathom what kind of party starts that early, but we decided to check it out anyway.

Sometime around 4PM, we reached the location. An unassuming little entrance with nothing more than a door with a “Mogra” sticker on it and a security guard. Not expecting much, we got in and went downstairs to the basement. At the end of the staircase was a girl in a manga cosplay costume. She smiled and opened the door for us.

I was blown away.

The place was packed. DJs were playing some sort of chiptune/jungle with anime theme songs layered on top, and everyone was dancing and partying like crazy. The walls were covered with projections of 8-bit intros and random anime footage. I saw a Ghost in the Shell clip whiz by and was completely overtaken by the experience. This, finally, was the kind of dystopian future I was hoping for – Sunday afternoon, deep underground, people dancing into oblivion lamenting over distant 8-bit worlds that never existed. 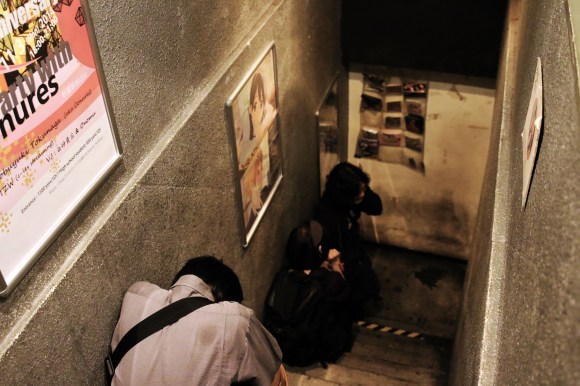 At 6PM we had run out of time and had to head out, grabbing the Narita Express back to the airport. As the city faded in the background, I realized that even though Tokyo might not seem as futuristic as it once was, it’s something even more unique – a place where future arrived prematurely. And in a unique Japanese way, they have found a way to live with it in harmony.

For a geek building hardware, there’s hardly a better place to be.