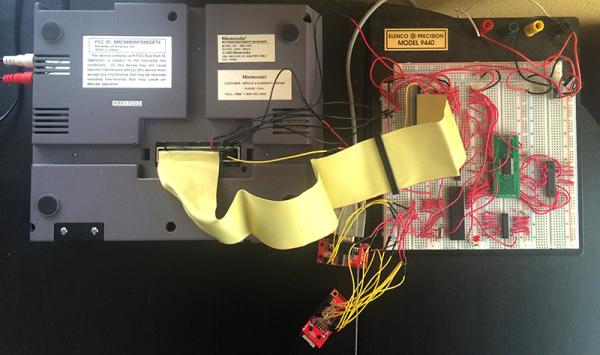 [Trapper] is an 80’s kid, and back in the day the Nintendo Entertainment System was his jam. One fateful night, he turned over his favorite gray box, removed a small plastic guard, and revealed the mythical expansion port. What was it for? What would Nintendo do with it?

The expansion port on the NES wasn’t really used for anything, at least in the US market. Even in the homebrew scene, there’s only one stalled project that allows the NES to connect to external devices. To fulfill [Trap]’s childhood dream, he would have to build something for the NES expansion port. Twitter seemed like a good application.

The first step towards creating an NES Expansion Port Twitter thing was to probe the depths of this connector. The entire data bus for the CPU is there, along with some cartridge pass-through pins and a single address line. The design of the system uses a microcontroller and a small bit of shared SRAM with the NES. This SRAM shares messages between the microcontroller and NES, telling the uC to Tweet something, or telling the NES to put something on the screen.

Only a single address pin – A15 – is available on the expansion port, but [Trapper] needed to read and write to a certain section of memory starting at $6000. This meant Addresses A13 and A14 needed to be accessed as well. Fortunately, these pins are available on the cartridge slot, and there are a number of cartridge pass-through pins on the expansion connector. Making a bridge between a few pins of an unused cartridge solved this problem.

From there, it’s just a series of message passing between a microcontroller and the NES. With the help of [Trap]’s brother [Jered] and a Twitter relay app running on a server, this NES can actually Tweet. You can see a video of that below.