Regulars who have been following our blog will recall the Mooltipass project which kick-started the “Developed on Hackaday” series. The idea is to bring together a team of interested developers and Hackaday staff to build a project created by and for the community. Along the way, we’ll document it on hackaday.io so everyone else can keep track of the project as we progress. Building hardware using a distributed team is difficult, but it’s getting easier by the day. All of the design development already happens on computers, but geographic issues like team members in different time zones and getting prototypes built, assembled, and distributed for alpha and beta testing needs to be taken into consideration on distributed engineering projects. Our goal is to document all of these hurdles and other issues to help others who want to take on their own engineering projects. 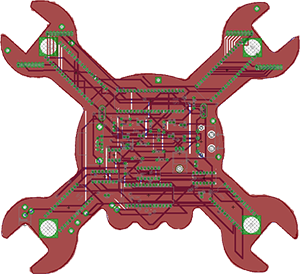 So we’re now kicking off a second project in the series. We haven’t fleshed out the details yet. It will be tied in to the user’s hackaday.io account, have a radio module and IR Tx/Rx, LED array and/or graphic display of some kind, some buttons, a buzzer and other stuff most badges have. We’ll need some nifty firmware and a web interface to round it up. Think of it as a physical extension of your hackaday.io avatar. We’d also like to have two flavors – a vanilla “user” badge and a superuser “sudo” badge to rule the other badges. Of course, we promise not to be evil and abuse the SU privilege. This Badge project was proposed by [Brian Benchoff], and he’s jotted down some of his initial thoughts in this project log.

What’s next? Follow the project and request an invite to the team. Let us know if you would like to contribute towards hardware, firmware code or website front end. We’ll be using Group Messaging to discuss the project. Let’s get crackin’!