If you live in New England (like me) you know that the roads take a pounding in the winter. Combine this with haphazard maintenance and you get a recipe for biking disaster: bumpy, potholed roads that can send you flying over the handlebars. Project Dekoboko 凸凹 aims to help a little with this, by helping you map and avoid the bumpiest roads and could be a godsend in this area.

The 2015 Hackaday Prize entry from [Benjamin Shih], [Daniel Rojas], and [Maxim Lapis] is a device that clips onto your bike and maps how bumpy the ride is as you pedal around. It does this by measuring the vibration of the bike frame with an accelerometer. Combine this with a GPS log and you get a map of the quality of the roads that helps you plan a smooth ride, or which could help the city figure out which roads need fixing the most. 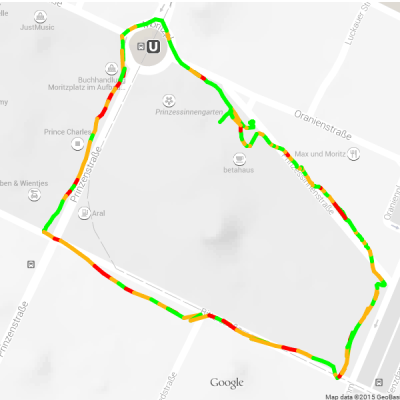 The project is currently on its  third version, built around an Arduino, Adafruit Ultimate GPS Logger shield, and a protoboard that holds the accelerometer (an Analog ADXL345). The team has also set up a first version of their web site, which contains live data from a few trips around Berlin. This does show one of the issues they will need to figure out, though: the GPS data has them widely veering off the road, which means that the data was slightly off, or they were cycling through buildings on the Prinzenstrasse, including a house music club. I’ll assume that it was the GPS being inaccurate and not them stopping for a rave, but they will need to figure out ways to tie this data down to a specific street before they can start really analyzing it. Google Maps does offer a way to do this, but it is not always accurate, especially on city streets. Still, the project has made good progress and could be useful for those who are looking for a smooth ride around town.

END_OF_DOCUMENT_TOKEN_TO_BE_REPLACED 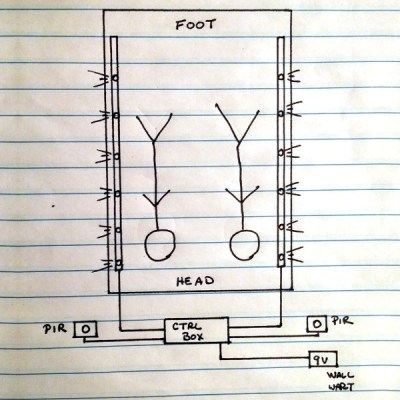 Usually when Hackaday covers electroplating techniques, it’s to talk about through-hole PCB plating. But did you know you can use the same method to produce beautiful copper and silver crystal structures?

[Fred and Connie Libby] are kind enough to share how they make their crystals that they sell in tiny glass vials you can wear around your neck. The process is simple as you would think; it’s just an electrolyte solution, with a current passing through it, depositing the metal in an ion-exchange. Rather then stop once the part is sufficiently covered, you let the process run amok, and soon large crystal formations begin to emerge. [Fred and Connie] share their technique very briefly, so if you’re looking for a more detailed how-to guide, you can find one here.

Although silver crystals are a bit out of our budget, we wonder how large of a copper crystal could be grown? Large enough to be displayed on a coffee table? Surely such a work of art and science could be an interesting conservation piece in any hacker’s home.

If you’ve been watching the countdown timer you’ve noticed that it’s run its course. The entry window for the 2015 Hackaday Prize is now closed, but that doesn’t mean you can stop what you’ve been doing. As we begin judging this slate of entries, heed my advice and continue working on your project in earnest because the next judging deadline is right around the corner: September 21st at 1:50pm Pacific Time.

For all entries complete the following:

Early next week we will announce the 100 projects that move on to the next round. We will also announce which of the Best Product entries will be among the 10 finalists. The Best Product competitors have additional benchmarks to meet:

Of course the Hackaday Prize is about building something that matters and documenting it as an Open Hardware project. Thank you for sharing your time and talent in preparing your entry. To recognize your effort this year, we’ll be awarding a commemorative T-shirt to all who complete the entry requirements. More information about claiming that shirt will be sent in the coming weeks.

Remember Atlas, the humanoid robot from Boston Dynamics? The company bought by Google, er, owned by Alphabet, and uh, most likely to become Skynet? Well — they’ve just shown us that Atlas can take a light jog through the woods now.

Published on YouTube a few days ago, Boston Dynamics gave a quick presentation on some of the upgrades the company has been working on for their bots. First up is a demonstration of Big Dog’s new appendage… What looks like an elephant trunk with a prosthetic hand on the end. Big Dog can now leave the testing lab any time he wants — door knobs are no longer an obstacle. Considering its been able to traverse extremely rough terrain for years now, this doesn’t bode well…

Atlas on the other hand has also come a long way. From standing on his own for the first time back in 2013, he moved quickly to being hit with medicine balls (and not falling over!) — and now, he can run outside. Luckily they haven’t quite figured out the battery pack solution yet… Video of his outdoor escapades after the break.