The basic design of the EM drive is a truncated cone, called a ‘frustum’ in the proper engineering parlance. This hollow frustum is sealed at both ends. An antenna, or a simple piece of wire, is placed into the device, about halfway between the small and large ends of the frustum. This antenna is connected to an RF generator, in most cases a magnetron or something else that can generate microwave frequency RF. 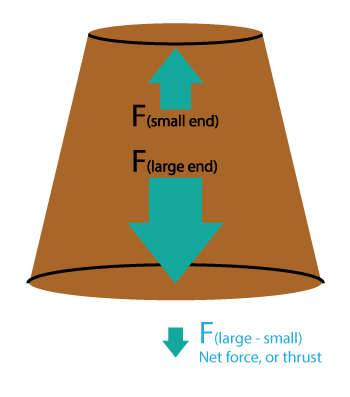 The EM drive produces thrust because of a differential force on each end of the frustum. Because one end of the frustum is larger than the other, the net force is the difference between the forces on the large and small end of the cone. As far as a theoretical explanation of why the EM drive works (if it actually does), that’s about as good as you’re going to get. Understanding some of the proposed theories of how the EM drive works requires at least a Master’s in physics and many years of experience with RF systems. It’s not light reading.

Although the EM Drive and similar RF reactionless drives have made the news recently, the first inklings in academic literature are actually relatively old. [Roger Shawyer], the person who will be called the grandfather of the EM drive, started down his current path of research in the early 2000s. The paper that can be considered the birth of the EM drive is The Performance Analysis of Microwave Thrust without Propellant Based on the Quantum Theory, published by [Yang] in 2008. This paper by [F.O. Minotti] from 2013 investigates the possible theoretical background of the EM drive. It was not until NASA’s advanced propulsion research group, also known as Eagleworks, found anomalies during their test of an EM drive that the media clued into the potential of a device that produces thrust using only electricity.

Right now there are a few lab results that are not conclusive. They do, however, point to some sort of effect, and recent tests have further refined how large the EM drive effect actually is. This is where scientists are separated from amateurs, and where the probability of the EM drive being real increases, even though that might not be the case. 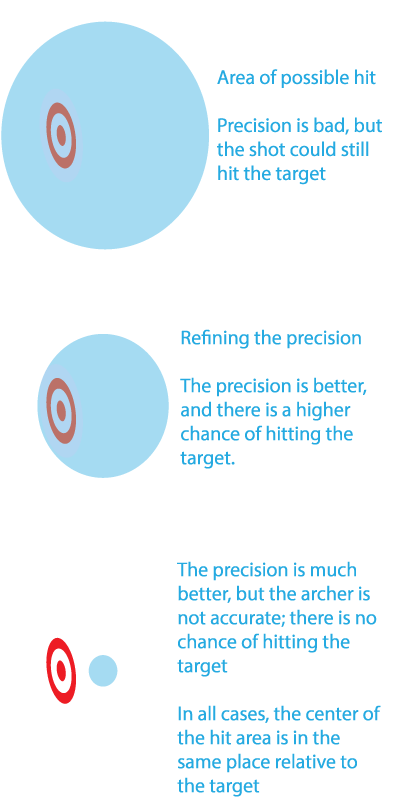 To visualize the strange statistical aberrations, imagine the statistician’s favorite example, the archer. An archer, by profession or proclivity, shoots arrows at a target. At the beginning of his career, he’s not a very good archer, but he does manage to hit the target a few times before he runs out of arrows.

After practicing a few months, the archer’s accuracy improves. His shots don’t go as wide as before, and he doesn’t have to walk as far to collect his arrows. In fact, he’s even hitting his target more often. Obviously, he’s improving.

A few more month’s worth of training later, and the archer can’t seem to land a single arrow on the target. Of course, he barely has to walk at all to collect his arrows, and all his shots land on the same square foot of ground. He’s amazingly accurate for a medieval archer, but he just can’t hit the target.

For anyone with any experience at all in statistics, this is how the difference between accuracy and precision is taught. Accuracy is hitting the target, precision is getting a tight grouping. This difference means strange things can happen when you slowly refine the accuracy of a measurement.

In the graphic to the left, the center of the ‘hit box’ in each of the three cases is in exactly the same place relative to the bull’s eye. The only difference is the reduction in accuracy makes the archer less precise.

This effect can be seen everywhere if you pay attention; in late 2004, the asteroid Apophis was discovered and predicted to have a 1 in 233 chance of colliding with Earth in the year 2029. Days later, the probability of colliding with Earth increased to 1 in 37. It was not until more data were collected that the threat to Earth from the asteroid Apophis was brought down to comfortable levels; in 2029, this asteroid will miss the Earth entirely.

This effect is also seen in the results from various EM drive tests. From the Chinese lab tests to the testing done at NASA’s Eagleworks, the observed effect has been further refined, and the signal to experimental noise figures increased. This is exactly what you would expect from anything that is being studied in increasing detail, and an increase in the probability that the effect is real is not proof of the effect being real.

However, this does not stop people from dreaming. The best research points to the EM drive generating 30kN of thrust for each kilowatt of power dumped into the frustum. Put more simply, one kilowatt (the power to light ten 100 W light bulbs, or run a microwave oven) could lift a 3000 kg object and hover a few feet off the ground.

To put this in more practical terms, a Tesla Roadster has a 58kWh battery and weighs about 1500 kg. Strap an EM drive to a Tesla, and you have a hovercar. Hovercars are cool, but the aircraft carrier USS Nimitz displaces about 100,000 metric tons, and is powered by two nuclear reactors that produce a total of 208MW. That’s a S.H.I.E.L.D helicarrier. Visiting another star with an EM drive is just one goal; if the EM drive works, we’re also going to get vehicles we can’t even imagine right now.

There’s still a lot of work to be done to tease the EM drive signal out from underneath experimental noise. It might not even turn out to be a real effect. However, multiple labs have tested versions of the EM drive and have found strange effects in their data sets. As it stands right now, the EM drive is only a few notches above a crazy guy who says he has a perpetual motion machine in his workshop. But even Galileo was labeled a heretic; the key is in proving the theory. The EM drive has stood up to tests so far, and if it turns out to be real, it will be an invention more important than the internal combustion engine.

226 thoughts on “The EM Drive Might Not Work, But We Get Helicarriers If It Does”