A lot of hackers like science fiction. If you aren’t one of them, you might not know that the Hugo is a prestigious science fiction award handed out at the World Science Fiction Convention every year. The statue looks like a rocket ship, but every year the base the rocket ship rests on is different. Kinetic sculptor [gfish] realized the convention would be in Spokane (his hometown and near his current residence) and decided to enter the competition to create the bases. He won, so the 2015 Hugos all have [gfish’s] bases on them and it’s pretty neat that he’s shared the process he used to make them. 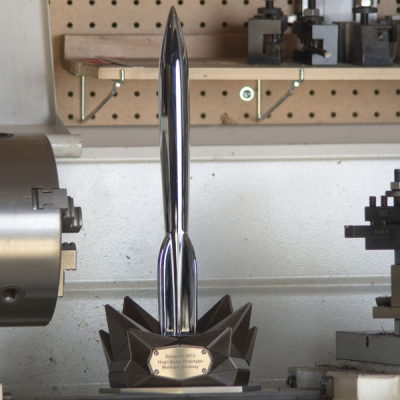 The design in Blender wasn’t the hard part. [gfish] had to experiment to find the right process to bring his vision to reality. After a few false starts with water jet cutting, he had 3D printed bottoms and had to fabricate a special magnetic jig to hold things in place for welding.

Overall, the result was worth it (see photo, right). We couldn’t help but wonder if you get a Hugo for designing the Hugo. Suppose not. Sculpting seems to be a popular hacking activity and we are no strangers to science fiction. However, having a part in the iconic Hugo awards makes us green with envy.

Of course, a lot of people (see the video below) were not happy with this year’s nominees. But that still doesn’t mean they weren’t handing out a cool statue.