Right now Hackaday and Tindie are in Philadelphia at the Open Hardware Summit 2015. These are the conferences I love; there aren’t many attendees – only a few hundred – but absolute everyone here is awesome. In the crowd is [Mitch Altman], [Johnny] of RAMPS fame, the guys from Parallax (busy programming badges), [Harris Kenny] from Lulzbot, [Joshua Pearce] from Michigan Tech, and pretty much everyone else that’s responsible for all open source hardware.

The talks? They’re great. You’re going to see a lot of reaffirming that tinkering and hacking on electronics and mechanics is a valuable and worthy pursuit, but there’s something for everyone, ranging from open source lab equipment to building true open hardware chips. Here’s a link to the livestream of the conference.

I suppose some mention of the swag bag is in order, and here’s the pic you’ve been waiting for: 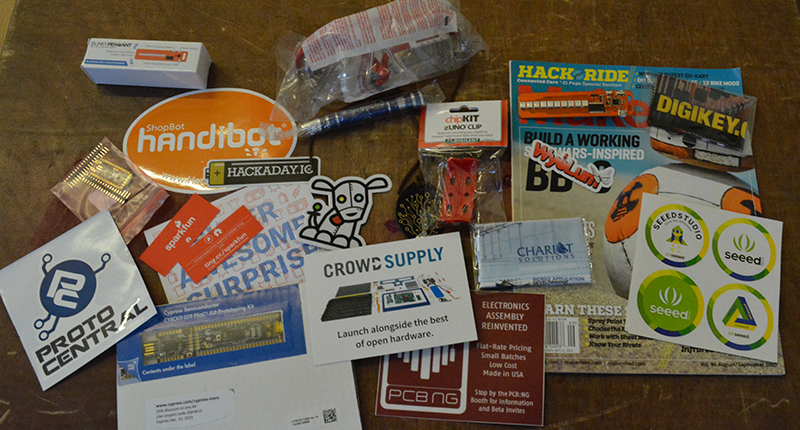 Last night, we paid our respect to the father of electricity by throwing a penny on [Ben Franklin]’s grave. Don’t ask why that’s a tradition, because I don’t think anyone knows. We’re going to pick up a wutter ice and eat it at the liberry down by the Skookil. The venue for OHS is conveniently right around the from a museum of medical oddities. Yes, it’s completely unrelated to any sort of Open Hardware, but the entire point of conferences like this is hanging out and talking with like-minded people. Whether or not you’re in the same room with the largest human skeleton doesn’t really matter at that point.