In 1980, Lake Tahoe, Nevada was a popular tourist spot. The area offered skiing, sailing, hiking in the mountains, and of course, gambling on the Nevada side of the lake. It was in this somewhat unlikely place where the authorities found the largest improvised bomb seen to that date in the USA.

Harvey’s casino was opened by former butcher Harvey Gross in 1944. In less than 20 years it grew to a 192 room, 11 story hotel casino. Thousands of people played Harvey’s slot machines and table games. Some were winners, but most were losers. John Birges was one of the latter. Formerly a successful landscaping company owner worth millions, he lost all of it to his gambling addiction.

Born in Hungary in 1922 as János Birges, John grew up in Budapest. When WWII hit, he flew an Me-109 for the Luftwaffe. He was arrested by the Gestapo for disobeying orders during the war, but was released. After the war, he again found himself in hot water – this time with the Russians. He was arrested in 1948 and charged with espionage. His sentence was 25 years of hard labor in the Gulag. The stories vary, but most agree that Birges was able to escape his work camp by detonating a bomb as a diversion.

In 1957 Birges and his wife Elizabeth immigrated to California. He changed his name from János to John to fit in. The couple had two sons, Johnny and Jimmy. John built up a successful landscaping business and bought a restaurant, working his way into the millionaires’ club. From the outside, they were the perfect example of the American dream.

Appearances can be deceiving. Behind closed doors, Birges was a right bastard to his family. He beat his wife and his children, even forcing them to kneel on gravel when they disobeyed him. Eventually, Johnny left home to escape his father’s fists. Elizabeth filed for divorce, and was later found dead under mysterious circumstances. Birges began gambling heavily, especially at Harvey’s Wagon Wheel casino in Lake Tahoe. He eventually burned through his personal savings, as well as the income from his businesses. The once millionaire was now penniless, but he had a plan. Just as a bomb had helped him escape the Gulag, he’d use a bomb to extort his money back from Harvey’s.

Birges built his bomb. He convinced his sons to help him. The trio stole TNT from construction sites, amassing more than 800 lbs. of the highly explosive compound. Then he built what may be the most insidious device FBI agents had ever seen: A detonator that could not be disarmed, even by its creator. 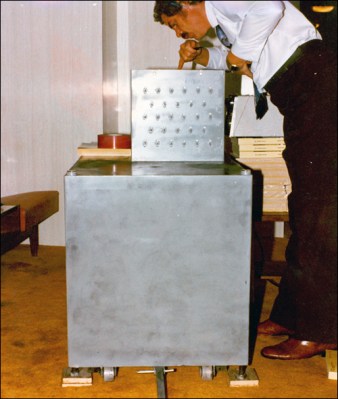 The bomb itself looked like two large steel boxes stacked on top of each other. It was disguised as an IBM copy machine in order to sneak it into the casino after hours. The only visible user interface was 28 toggle switches arranged in 5 neat rows. Investigators found the bomb armed – 27 of the switches were toggled off. However, switch #23 was on. Like everything with this bomb, the switches included quite a bit of misdirection.

There were no less than 8 independent trigger systems, each capable of causing an explosion: 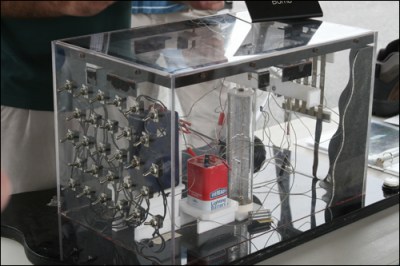 The bomb wasn’t delivered alone. It came with a note describing the various triggering systems and explaining that the bomb could not be moved. Birges’s plan was to have the money delivered to him by helicopter. Once that was taken care of, he would provide the bomb squad with the correct switch configuration to disable the tilt sensor. At that point the bomb could be moved to a location where its explosion would cause no harm.

Like most plans, Birges’s fell apart rather early on. One of his sons got a speeding ticket, placing him near the ransom drop point. His girlfriend drove off the road, resulting in her hospitalization. The helicopter pilot missed the drop zone. Even if the pilot had found the right spot, he would have only found $5000 cash. The rest was blank paper cut to look like 3 million. The chopper also carried an armed FBI agent hiding behind the pilot. 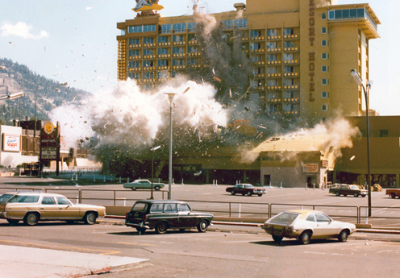 With the ransom drop a bust, the FBI now had no way to contact their bomber, and no idea when the bomb was set to go off. They carefully took X-rays of the detonator. The murky images confirmed the claims of the ransom note. The only plan they could come with was to attempt to split the TNT box from the detonator box with a shaped charge of C4 explosive. If the charge was fast enough, it could cut the wires before the tilt switch was triggered, preventing the explosion of the larger steel box.

Unfortunately, the FBI didn’t plan on Birges’s last booby trap. He had left a few sticks of dynamite in the detonator box. Essentially, dynamite is composed of sticks made from sawdust that are soaked in nitroglycerin, a much less stable explosive than TNT. The shaped charge detonated the dynamite, which then caused the TNT to explode. The tremendous explosion left a 5 story deep crater in Harvey’s casino. Thankfully, no one was hurt or killed. 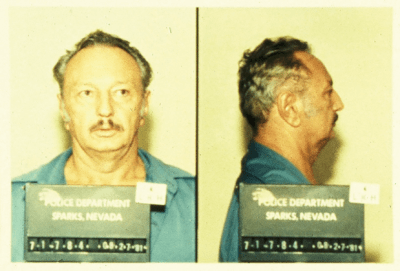 The manhunt which followed the bombing was one of biblical proportions. The case wasn’t cracked however, until Johnny’s ex girlfriend talked to someone about his participation in the plot. Once caught by federal agents, Johnny and Jimmy both turned on their father, who was arrested. Birges couldn’t find a lawyer he agreed with, so he defended himself in court. He was found guilty and sentenced to life. He died in prison of liver cancer in 1996.

Some of the FBI agents involved say that even with today’s technology, Birges’s bomb would still be tough to beat. In fact, the bureau still uses a replica of the bomb to train agents. While the actual circuitry inside was incredibly simple, consisting of several parallel circuits, the mechanical design made it extremely hard to work on. Most of all though, we can see that this bomb, like just about every other real bomb, didn’t have a visible clock. Placing a pretty LED display on the outside of the box is something that happens in the movies, not reality.

403 thoughts on “This Is What A Real Bomb Looks Like”