Happy new year, and welcome to the first Hacklet of 2016! The Hacklet is one of my favorite columns to write, as I get to talk about the great projects people are working on at Hackaday.io. Generally these articles follow a theme, but this being a new year, I’m going to try something new. As Hackaday’s community editor, I keep an eye on the new and updated projects feeds over on Hackaday.io. Every single week I see projects that surprise, impress, and inspire me. This week, I’m going to highlight a couple that I think are just freaking awesome. 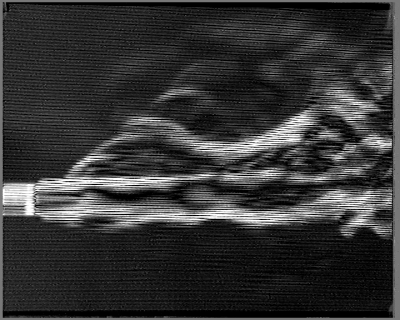 [Jana Marie] created the Schlieren-Videography project. Schlieren photography is used to image changing densities in fluids and this includes capturing density changes in air. Super and Hypersonic wind tunnels often use this technique to show airflow around a test model. Outside of the wind tunnel, Schlieren is great for showing density changes due to heat or different gasses. That’s exactly what [Jana] is doing in this project.

There are several ways to create Schlieren images, everything from lasers, to diffraction gratings, to razor blades can be used. [Jana] is using a simple moiré pattern and a couple of video tricks to capture Schlieren video. A high density moiré pattern will appear to flicker as density changes bend the light from the moiré stripes. [Jana] simply takes a reference image, then subtracts that image from the live video. The result of the subtraction is the Schlieren images you see above. [Jana] did more than explain the technique she’s used to create the videos, she’s also uploaded a processing sketch which performs the video subtraction magic. 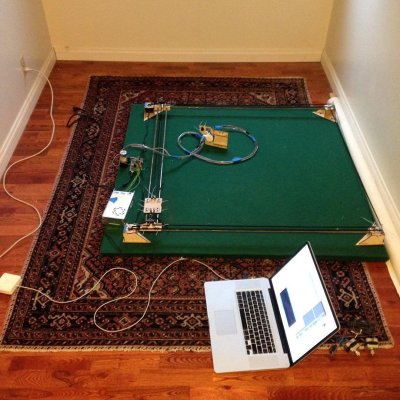 [Dan Royer] has a more domestic problem – his family loves starting jigsaw puzzles, but never seems to finish them. He’s decided to invite around 3 billion of his closest friends in the form of JigSolve, an internet connected jigsaw puzzle robot. JigSolve’s Cartesian platform  is a CoreXY based design. [Dan] used CoreXY as a guideline, but designed and built the hardware himself. The electronic hardware side borrows from RepRap 3D printers. An Arduino Mega2560 and RAMPS board control two NEMA 17 stepper motors. The Arduino is running firmware from Makelangelo, [Dan’s] own open source art robot.

The hardest part of JigSolve thus far has been the nozzle. Much like an SMT pick and place machine, the nozzle needs to pick up parts with a vacuum, then rotate them to the desired orientation. [Dan] is looking at different kinds of silicon, and he’s asking for suggestions. Stop over on the project page and offer him a hand!