Hi, I’m Al, and I’m an oscilloscope-holic. Just looking around my office, I can count six oscilloscope or oscilloscope-like devices. There are more in my garage. If you count the number of scopes I’ve owned (starting with an old RCA scope with a round tube and a single vertical scale), it would be embarrassing.

On the other hand, if you are trying to corral electrons into doing useful things, a scope is a necessity. You can’t visualize what’s happening in a circuit any better than using an oscilloscope. Historically, the devices were expensive and bulky. I’ve had many Tektronix and HP scopes that stayed in one place, and you brought what you were working on to them (sometimes called a “boat anchor”). It wasn’t that long ago that one of my vintage Tek scopes had its own dedicated cart so I could wheel it to where it was needed.

These days, scopes are relatively cheap, depending on what you have in mind for performance. They are also highly portable, which is nice. In fact, it is an indication of how spoiled I’ve become that my main bench scope–a Rigol DS1104Z–weighs seven pounds, yet I still look for something smaller for quick jobs.

That’s how I came into possession of two cheap scopes I wanted to talk about. They are similar in ways but different in others. Neither are going to replace a real bench scope, but if you want something portable, or you are budget-limited, they might be worth a look.

Before I dive into any details, you might think about how much you are willing to spend for a scope–especially if it is going to be your only one. If you are just looking to save money, my opinion is that you are better off buying a cheaper, older bench scope. With the availability of perfectly good scopes from Owon, Rigol, and others in the $300 range means older scopes can only sell for so much. Granted, if you actually need a scope with 5 GHz bandwidth, you are still going to have to spend a lot of money, but for most of us, a 50 or 100 MHz scope with a few channels is perfectly fine. A quick search on eBay turned up two nice Tektronix scopes and an Agilent for $100 on the first result page, for example. You could probably get something for even less if you shopped around.

There is a rash of very cheap scopes based on fast ARM or other processors. These are neat, but the reality is that many have low-bandwidth front ends or suffer from other issues. Some of the $15 or $20 kits are reasonable at that price, but once you get up to the $100 neighborhood, I think you should have better if you are looking for your first scope. The same goes for “soundcard” scopes (mainly an input network that feeds signals into your PC’s soundcard). Fine for a DIY project, but probably not what you want for your only scope.

The two scopes I want to look at for now are the Owon Wave Rambler and the AllSun (or, sometimes, ESun) EM125. The Owon is a small hand-held probe with a USB cable that sends data back to a PC application. The EM125 is a scope meter — it has a small display and can also work as a volt or ohm meter. It does not connect to a PC. Either instrument costs just about $100 and is easily available. 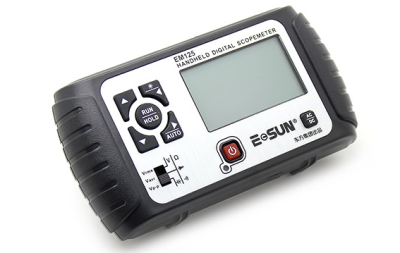 The EM125 is about the size of a mid-size digital volt meter, but while most volt meters are held in a portrait orientation, the EM125 is landscape. In fact, it looks somewhat like cheap knockoff Playstation hand-held video game.

One thing I like about the EM125 is it has a USB-chargeable battery that lasts a long time. I had an old Velleman handheld scope that used NiCads or regular cells and the first thing you had to do when you wanted to use it was either charge or replace the batteries.

The EM125’s monochrome screen isn’t going to give an iPhone any competition, but it is serviceable. The menu system isn’t totally intuitive, but it works well enough. The scope part of the instrument has a reported 25 MHz bandwidth and there is a proper connection for a scope probe. The meter section uses a standard shielded banana plug. That means that you can’t just hook a probe to a point and then read everything off the probe.

There is a nice little kick stand that holds the meter at a good angle if you want to use it and a switch to turn on the battery-draining LCD back light. I don’t like to use a scope’s auto function, but on this little meter, it is handy just to hold down the button and let it find proper settings for a given waveform.

You can set up everything manually, though. You can trigger on rising or falling edge, and set the horizontal and vertical scales. You can also set a sort of auto trigger mode along with the trigger level. The meter shows the frequency and voltage of the signal (you can select RMS, average, or peak-to-peak readings). There’s also a display for battery level and a switch to select AC or DC coupling. There is a USB port, but as far as I can tell, that is just for charging the battery. Unfortunately, there’s no probe compensation signal or other test output. 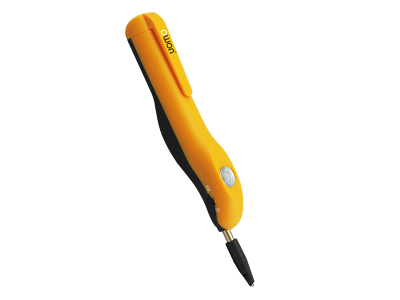 The Rambler is not too different from the EM125 regarding cost or performance. It also claims a 25 Mhz bandwidth. It is USB powered, so batteries aren’t an issue. However, there’s very little to it other than a scope probe tip that is part of the device (you can’t use your own probes). There is a switch to select 1X or 10X and a multifunction trackball that reminds me of a Blackberry pearl.

You must use the Windows software to see any results. I didn’t have any luck running the software under Linux, although I didn’t go as far as to use VirtualBox. There is some very basic open source for the OWON RDS scopes, but I couldn’t get it to work with this particular device.

On the plus side, you can get some fantastically cheap Windows tablets lately (well under $50), and the scope did work with those. The software interface is a little clunky on a tablet though, so I wound up mostly using a Windows laptop. But if you need a portable solution, a tablet and the Rambler could be an answer, and the software is more capable than the EM125. Like the EM125, there’s no calibration or probe compensation signal available.

How Do They Work?

Subjectively, both of these devices feel different from using a normal oscilloscope. The EM125 is handy and has a real scope probe, but the relatively poor quality of the screen means you can’t really see the detail you probably want. The Rambler, on the other hand, gives you plenty of detail, but holding the fat probe and using the trackball takes some getting used to. It also absolutely requires a PC or tablet to be connected.

If you want to see more about these devices, see the videos below. Next time, I’m going to put both of these scopes through their paces with some simple waveforms and see how they do in a less subjective way.

Honestly, I might use the Rambler more if it supported Linux nicely. It is much more like an ordinary scope in function, if you can just get used to the feel of it and don’t mind lugging a PC around. On the other hand, the EM125 has earned a place in my go bag. Instead of a basic meter, you can carry this and get a meter and a scope (although the meter won’t measure current). Maybe the scope isn’t great, but it is better than having no scope at all.

Just remember, for about the same price you could get a traditional used scope that probably has multiple channels and a host of other features you’d really enjoy and use. Sure, it might also weigh more than your whole PC, but it would be more useful. However, either of these would make a good second scope if you have any need for portability.