For some people to join a new group is an exciting proposal, to meet new people and interact with them to accomplish a goal is their idea of a good time. If this describes you then you’re all set to jump in there and make some new friends! There are other people who see social interaction as not such a good time. They would rather avoid that situation and go on about their normal day, I get it. In general my level of comfort is inversely proportional to the number of people with me. This is not a character trait that I chose, I’m an introvert by nature.

The stereotype depicts hackers, nerds, or geeks as people without many friends who spend most of our time alone or you might just call us “loners”. I should make it clear that I’m writing this article from a table for 1 at my local diner and it would be out of the ordinary if there was another person at this table with me. Just in case someone feels the need to speak to me I’m wearing headphones as a deterrent, audio delivery is not their use at this time (headphone hack). I can feel the first comment brewing so let me nip that in the bud real quick: I’m in a restaurant AND actively being alone because there are often too many distractions at home to get things done in a timely manner. And I like the pancakes.

Before I climb up on this soapbox let me say that many of you are already involved in the community and are doing a great job, in fact I’m pretty sure many of the old-timers I talk about are Hackaday readers. This article is a result of my self reflection regarding my lack of community involvement as of late. I can’t think of any reasons why I shouldn’t take myself down a peg or two publicly, enjoy.

I won’t bother with the “Ra-Ra! Team Spirit!” garbage to get you all jazzed up to be a part of the team. But I will tell you what you’re missing out on by not being active and participating. It’s similar to the saying “You can lead a horse to water but you can’t make that horse join a group of like-minded horses that would all benefit from a wealth of horse-knowledge.” The saying changes depending on where you’re from, that’s how it was told to me.

Try Saying Yes to Everything

This is where you can get into a holding pattern if you aren’t careful. You don’t have to over-think this decision, next time something interests you speak up. Say: “That sounds fun, count me in!”. It’s that simple a lot of times, by voicing your interest in an area… we need an example here don’t we? 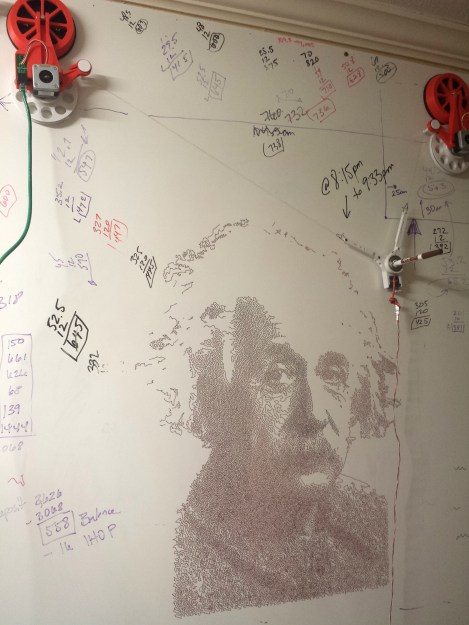 Alright, let’s say I walked into the Dallas Makerspace for the first time and I was taking the free tour to see what the place was all about. While I was hypothetically being guided around the building there were members everywhere doing all the normal member-y things. Obviously I came across something that interested me (it’s a hackerspace afterall): a robot designed to draw on dry-erase boards. We won’t ever know what would have happened if I had spoken up at that moment and told the guy running it that I was interested.

In a related story: I did finally speak up and asked [Brandon AGr] about his robot… 8 months later. It was the beginning of an exciting project that took another 2 years to get finished, it was an amazing experience that I wouldn’t trade for anything.

What if I hadn’t ever said anything to [AGr] about his robot that I thought was interesting? How many times have I seen a project or concept that inspired passion in me and not said anything? How many times have you kept quiet when you could have said “Hey, that’s pretty interesting. What was your motivation for the design?” or something more relevant to the situation?

What do you call a group of introverts?

Obviously I can’t speak for anyone other than myself, but my closest friends are introverts. I started to write that as if you might not have known that about me. As I got towards the end of the sentence it dawned on me “Of course my friends are introverts, otherwise they wouldn’t be my friends.” I’m not saying that I only choose to be friends with people that are similar to me in this way. But if you think about it logistically, how else could that relationship work?

I told you all of this introvert business because I’m sure some of you are introverts as well. If you’re anything like me you may be hiding behind it instead of interacting. The difference for me was how I treated the events, if I go into it thinking it’s a social event I’ll start planning my Irish Exit before arriving at the event. If I treat it as anything else I tend to do much better. If I’m going to meet with someone about a specific project or discuss a subject then I focus on the topic, once the meeting is over I don’t linger to mingle and/or socialize. That would be exhausting. Instead, I go on about my day as I would normally do.

Getting back on the topic of collaboration on projects, how many times has someone decided not to speak up about one of our projects? How many times could I have helped someone with a problem that I myself have struggled to solve? I can deal with my own demons but when I think about people that may have been too shy, embarrassed, or intimidated to ask for help or express interest it doesn’t sit well with me. That’s what I’m really on a soap box about, paying forward all the knowledge and experience shared with us by our old-timers. I’m by no means done gathering info from those who have been doing this longer, and if a kid has the courage to ask me for help with an electronics project or physics experiment or science fair project I’ll re-arrange my life to accommodate.

Not too long ago a young [Akash Vijay] did ask me for some help with his school project. His goal was to charge a cell phone from the rear wheel of his bicycle. This is not an original idea, but his implementation was impressive. [Akash] had the theory pretty well worked out but had some small issues with hardware. We met up at the Dallas Makerspace and spent a few hours in the electronics room. I gave him a quick soldering lesson, a little help using the oscilloscope, and some troubleshooting tips. It didn’t seem like much to me and in-fact I think he would have come to the same result eventually, I just shared some troubleshooting techniques he wasn’t familiar with. That is the story from my perspective mind you, if you had been in the room when charging LED came on you would have thought I gave [Akash] one of my kidneys. His parents also shared his enthusiasm, I was taken aback to say the least. 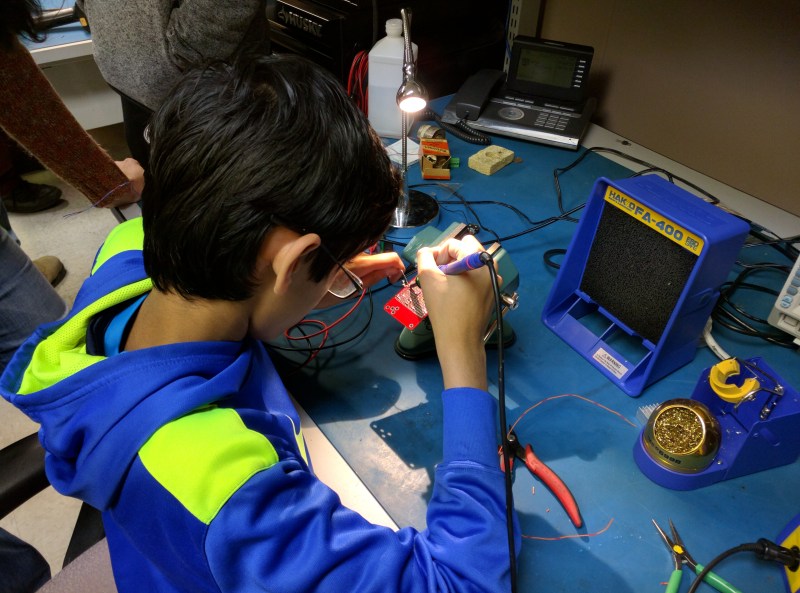 If I had to tell the story in a single sentence: “I helped [Akash] find a problem in his circuit with a multi-meter.”

What seemed trivial to me was definitively non-trivial to the three of them. They were genuinely stuck and needed help, which was originally presented to me in a very reserved manner. It wasn’t until that LED came on that I understood the weight of the situation. When the circuit was assembled and the bicycle was pedaled I expected the LED to come on, they did not and to them it was almost a miracle.

I’m by no means a troubleshooting genius, that’s not what I’m saying. The problem that was presented to [Akash] is a problem that has been presented to me, and at one time it stopped me in my tracks. I was stuck. But once you see a problem enough times it does become trivial, the process becomes as mindless as driving to work. To stick with the driving metaphor: the day I was scheduled to drive a car on the road for the first time I was so nervous I wasn’t able to eat anything the entire day. Not only was it a terrifying event, but by thinking about it all day I made it much worse in my mind. When school was out for the day and I was dropped off at Drivers Ed I drove the car on the road just fine. As it turns out the system was designed with a nervous 15yr old kid in mind and to make sure everyone involved would be okay they put an experienced driver in the car with me. I won’t tell you whether Mrs. Penny had to use the brake pedal on her side or not, but we all lived through the experience.

Pass on Your Knowledge; Be a Community

We’ve all been there: completely stumped, stuck, out of options and ready to give up or perhaps some of us had already given up when the old-timer walked into the room. “Have you tried the blah, blah, blah?” they said in passing, which was the equivalent of giving us one of their kidneys. It was fixed, problem solved! Circuit = YES! The kicker is that I’m not even completely sure they looked at the problem area long enough to spot my defeated spirit, but they sure as hell fixed it.

I’m suggesting we give that back. Not to the old-timers we got it from, but perhaps you’ve seen someone struggle that might appreciate a nudge in the right direction? Or consider offering some information in the form of a class at your local hackerspace. Post your how-to guides over on Hackaday.io and look around for projects that need some help overcoming a problem. Every time you can inspire someone else, or help make their path to the finish a bit less bumpy, you are making a difference and you are building and participating in the Hacker Community.

At some point in the distant future we will be the old-timers, and I’ll be damned if I’m not going to give it all back to the community I got it from. And in true old-timer form it’s never too early to start telling someone the same story for years to come.

If you aren’t familiar with Hackaday.io events check out the Hackaday LA Meetup hosted by [Jasmine], and the Hardware Developers Didactic Galactic hosted by [Chris Gammell] in San Francisco. And one last plug for Mrs Penny’s Driving School in Dallas hosted by [Brandon Dunson].