Although this sort of work is usually reserved for KansasFest and other forums for highly technical and very skilled Apple enthusiasts, [John Brooks]’s release of a new version of the ProDOS operating system is no less important. It is, without a doubt, the greatest release the Apple II platform will see for the next few years. This swan song of the Apple II platform is simply ProDOS 2.4, an update to the last version of Apple’s ProDOS, last released in 1993.

For a bit of historical context, ProDOS was not the operating system that shipped with the Apple ][ in 1977. That OS was simply called DOS. ProDOS, released in 1983, included support for the new 3.5″ floppy drives, allowed for hierarchical directories, supported hardware interrupts, and kept the Apple ][ line going well into the 90s. Despite these improvements, not all Apple ][ systems were supported. The original ][ and ][+ were out in the cold. Now, with the ability to add Compact Flash and USB devices to an Apple ][, even the latest version of ProDOS is horribly out of date.

[John]’s release of ProDOS 2.4 fixes all of this. This release is the most important development in the Apple ][ ecosystem in recent memory, and will remain so for at least a decade. The only person who still uses an Apple ][ as a daily driver agrees, and ProDOS 2.4 is now enshrined in The Archive for all eternity. 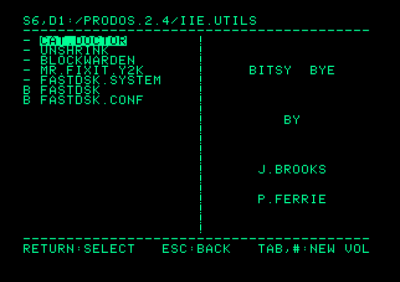 New features abound, although most of them are geared toward the now thirty-year-old Apple IIGS. These features include enhanced utility in GS/OS – the Apple equivalent of the Commodore GEOS – slot remapping, and an OS that is both smaller and loads faster. Older machines aren’t left out, and ProDOS includes the usual features and improvements found in ProDOS 2.x that weren’t available in the Apple ][, Apple ][+ and un-enhanced Apple //e.

The killer feature and one more thing of this release is the BitsyBye utility, a small ($300!) system program that allows you to boot various Apple II devices and programs. Think of this as the Norton Commander of the Apple II ecosystem, allowing slots to be selected, booting the most recently used ProDOS device, and basic file system exploration. BitsyBye also includes an easter egg. A few utilities are also included on the ProDOS 2.4 disk image including ADTPro, Shrinkit archive expander, and disk utilities.

A 140k ProDOS 2.4 disk image is available on [John]’s site and on Archive.org. Since you’re probably not downloading directly to an Apple II disk, grab ADTPro and load it over audio.

33 thoughts on “A New OS For Apple II Computers”