There were two or three offerings from Cohesion3D, depending on how you want to look at it. The star of the booth was obviously the Cohesion3D ReMix – the big board with six sockets for Pololu motor drivers, an LPC17xx microcontroller, a 20 A MOSFET for a big heated bed, protected endstop inputs, WiFi provided by an ESP8266, and a space for an Ethernet module.

The next-smallest board presented is the Cohesion3D Mini. This board really isn’t meant for 3D printers, although since there are four motor drivers it’s certainly possible to build a printer with it. The Mini is designed for small desktop mills and laser cutters. Right on the board is a connector for a K40 laser cutter, that ubiquitous Chinese laser cutter that always has a terrible control board. With a small, inexpensive adapter that plugs right into the endstop pins, the Mini is a drop-in replacement for the K40’s control board. Like all boards running the Smoothie firmware, upgrading the firmware is as simple as plugging the board into a computer, dropping a text file on a drive, and resetting the board. 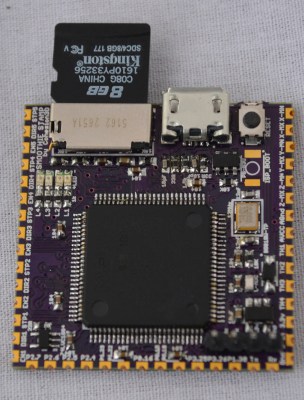 While not officially a Cohesion3D product, there was a third board presented at Maker Faire. This unnamed but very tiny board is basically a Smoothie system on module. It features the LPC17xx microcontroller, a USB receptacle, microSD socket, reset button, and a bunch of castellated pins. These pins are intended to be connected to stepper motor drivers, GPIO, endstops, MOSFETs, and everything else a CNC or 3D printer control board needs. It’s a pretty smart little device, and while I don’t know if it’s going to be released, it does signal the coming commodification of 3D printer paraphernalia.

In looking at these boards designed for the Smoothie firmware, it’s hard not to draw parallels between the two or three most commonly used 3D printer firmwares, and the vast ecosystem of ATmega-based 3D printer controller boards. There are dozens, if not hundreds, of printer controller boards, all designed for a different task. The RAMPS is almost a standard in itself, but if you need a 24V board, you might want to give the RUMBA a look. If, for some odd reason, you need six motor drivers, there’s a board for that too.

The ecosystem of 3D printer controller boards has filled every ecological niche, but only on the island of 8-bit microcontrollers. Over in the land of 32-bit microcontrollers, there aren’t really that many options. If anything, the offerings from Cohesion3D is the first generation of boards after the introduction of the Smoothieboard. There’s going to be more of these boards, and they’re all going to serve enough use cases to be viable.

The SmoothieBoard itself is coming up on version two, or so we’re told,  and of course that board will have enough new features to make things very interesting. Until then, if you’re looking for a 32-bit motion control board, your options have just doubled (or tripled). It’s a great time to build your own CNC machine, and it’s only going to get better.