The 2016 Hackaday SuperConference took place last month in sunny Pasadena, California. Also calling Pasadena home is the Jet Propulsion Laboratory, the place where Mars rovers are built, where probes are guided around the solar system, and where awesome space stuff happens.

JPL had a large contingent at the SuperCon and two of them teamed up to present their talk: Charles Dandino and Lucy Du. Lucy is a mechatronics engineer at JPL and already has a little bit of fame from fielding a Battlebot in the last two seasons of ABC’s series. Charles is also in mechatronics, with experience with Curiosity, the Mars 2020 rover, and the (hopefully) upcoming asteroid redirect mission.

In their talk, Charles and Lucy uncovered some of the hacks happening in the background at JPL. There’s a lot of them, and their impact goes much further than you would expect. Everything from remote control cars to keeping spacecraft alive on the other side of the solar system.

As far as recent NASA hacks go, an interesting problem cropped up during the development of the Ares I rocket, the ‘small’ crew launch vehicle of the canceled Constellation program. During the development of the rocket, engineers noticed the gigantic solid rocket booster powering the first stage caused massive oscillations in the crew capsule. Structurally, everything was fine, but humans are weak bags of mostly water, and astronauts couldn’t read the digital displays when subjected to these vibrations.

The most obvious solution to this problem would be to fix the oscillations in the rocket. This, however, would require an enormous amount of effort, for something as simple as fixing the pilot’s blurry vision. A much better solution was found, using cheap, off-the-shelf parts and a bit of code. By strapping accelerometers onto the seats in the crew capsule, the frequency of the rocket’s oscillations was measured and the digital displays were strobed at the same frequency. That was enough to fix the problem, and it did so using only a very few very inexpensive parts.

What’s the coolest improvised engineering coming out of JPL today? Charles is working on the asteroid redirect mission, and that means figuring out a way to grab an asteroid and tow it back to somewhere around Earth. To do that, the team needs to test their equipment and that means making their own batch of asteroids. 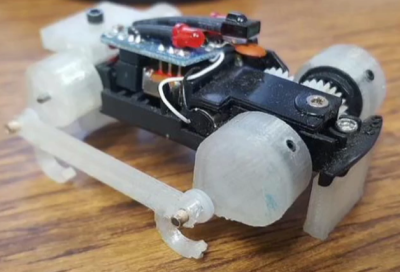 We don’t really have a lot of data on the surface composition of asteroids. Sure, NASA has crashed into asteroids very, very slowly, and the ESA recently tried to land the Philae lander on a comet without much success. Generally, we have an idea of what the surface of an asteroid should feel like, and to test the grippers for the asteroid redirect mission, JPL is developing their own mix of foamed concrete. It’s soft, flaky, and completely unlike anything on Earth that has been subjected to four Billion years of geology.

Elsewhere around JPL, engineers are building models for equipment they hope will be part of a mission in the future. These models range from cheap remote control cars laden with very expensive sensor packages to Hot Wheels cars retrofitted with 3D printed parts and gears.

There’s a long tradition of experimentation at JPL. The first Mars rover — Sojourner, the tiny shoebox-sized robot carried along the Mars Pathfinder mission — had a new, innovative rocker-bogie suspension system. When the mission was in the planning stages, there were a few questions if this suspension system would work. Those fears were allayed once an engineer brought in a working model of this new kind of rover.

All in all, Charles and Lucy presented a great talk on what makes space stuff work. If you’re looking for the weirdest, most creative applications of non-standard engineering, you don’t need to look any further than NASA and JPL.

10 thoughts on “Hacking Your Way Through NASA”