What is Virtual Reality, Really?

We all know what VR is, right? It’s that trope in sci-fi where you’re stuck in the Matrix, unable to tell that you’re not actually in the real world. All of your senses are simulated so well that you’re fooled into generating power for the hive mind. [David] has slightly more realistic goals. 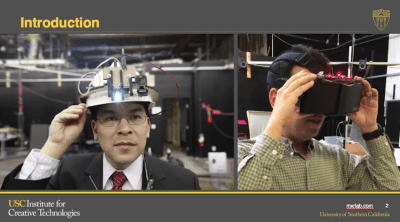 For [David], it’s about immersion. And the gold standard for him is that immersive VR makes you act as if the VR world were real. It’s not that you can’t tell the difference between the real and the virtual, but that you behave in and react to the VR world in the same ways that you would to the real. If you’re engaged, the VR experience is a success.

If the goal is a VR world that helps train military or pilots to operate their machines and work in teams, does it matter that they can’t actually tell what the inside of a tank smells like? Instead, what’s important is that the “sensorimotor contingencies” are right — that what you’re doing affects the world in the right ways. In the earliest Oculus Rift headsets, for instance, they only tracked motion with a gyro, so you could look around the world as if you were in a fishbowl. But when you strafed (moved your head side to side) it wouldn’t react. Later versions fixed that, and became significantly more immersive. 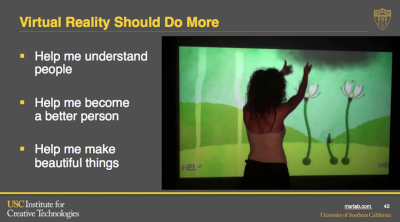 But VR is not all about the hardware. How the scenarios are crafted and even the quality of the art matter a lot. In one of the more poetic moments of the talk, [David] insisted that you should be able to leave footprints in the sand. He was talking about how the user changes the virtual world, but he’s equally interested in how the VR world changes the user.

In all of these metrics, VR has made tremendous progress in the last decade, and [David] thinks it’s going to continue. What made this all possible? Affordable VR headsets. When a VR headset cost $60,000 per unit, no matter how immersive the experience was, nobody was going to use it for teaching children, or as therapy for stroke patients. With cell-phone-based units as cheap as $10, the landscape is dramatically different.

For [David], the Oculus Rift was the breakthrough device, because it demonstrated that there was market demand for a “cheap” VR device and encouraged other companies to make competing products.

The Myth(ology) of the Garage

So where did the Oculus Rift come from? If you believe their marketing hype, it was created by a genius gamer kid alone in his parents’ basement, who overcame all of the stumbling blocks that had plagued VR for decades. This plays into the Silicon Valley mythos of the company that starts off in the garage and goes on to change the world, and [David] gives the story a refreshing debunking. 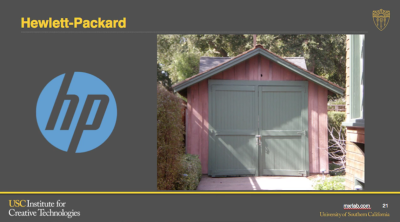 HP “started” out of a garage. Well, kinda. The early prototyping and R&D actually took place in a lab at Stanford University. Apple started in Steve Jobs’ garage, right? There was no design or manufacture done there, but they did use it for testing and temporary warehousing before shipping computers to stores. Most of the conceptual work was done in a space at the Stanford Linear Accelerator, and of course in the community of the Homebrew Computer Club. Google had a garage — that they rented out after they had a few million dollars in seed investment. But of course, the initial work on Page Rank was already done by then. And when was that work undertaken? While Sergey and Larry were graduate students at Stanford.

The point is, the Silicon Valley garage mythos is a myth. The idea of the special whiz kids working along in their garage or basement just doesn’t stand up. In all of these cases, the founders were actually part of a larger community that was working on the problem. And in all of these cases, the community was also an academic one, but there’s no reason to think that the next big ideas won’t be coming out of well-equipped hackerspaces or anywhere that there’s a “community and a culture that creates and shares ideas”. (We’ll take that as an unintended compliment!) 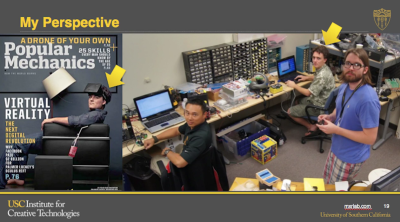 [David]’s lab has been interested in making low-cost VR a possibility since 2010. In 2012, for instance, they built a cardboard VR device with lenses that you could slip your cell phone into. They were able to make them so inexpensively, using a laser cutter, that they gave them out for free at a conference. In 2014, we’d see this idea hit the mainstream as the Google Cardboard.

They’d been doing smartphone-based VR work since 2011. Some people at Samsung actually wrote them an e-mail thanking them for open-sourcing their work and inspiring the development path for the Samsung Gear VR headset. And, of course, [David]’s lab hired and trained a young kid as a technician, who would later go on to found Oculus VR. “In his garage.” 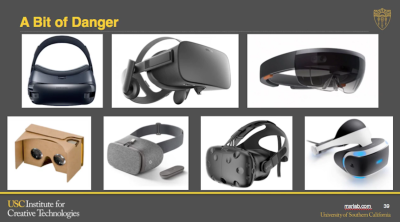 Now that VR headsets are ubiquitous and cheap, what’s next on the horizon? It’s no secret that VR is going to be dominated by gaming for the next decade. But [David] has hopes for other uses as well: using VR to make us better artists, engineers, builders, and makers. VR will also have a role in education, as people can take tours and interact with machines that they never could in real life.

[David]’s fear about the future of VR is that, as the major gaming companies fight to segment up the industry, it will lead to walled gardens. If you want to play Sony’s games, you need to buy their headset, pay for the games in their store, and essentially confine yourself to their world — and contributing to their bottom line. 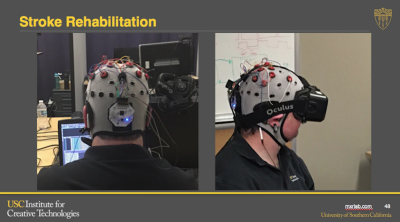 But if we can avoid falling into that trap, [David] sees a lot of new and interesting opportunities for VR. You know how sometimes you have to walk back downstairs to remember what you were thinking about when you were in the kitchen? That “context-dependent memory” is an interesting area of VR research. There’s a lot to learn about people in VR: how people interact with virtual characters, and what that says about our ideas of personal space. And there are opportunities for therapy. [David]’s lab does work with stroke victims, testing if moving their arms in a VR world can help them to regain control over their own real limbs. 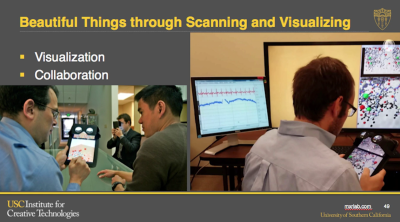 Then there are open avenues in making VR itself better. [David]’s lab did some especially neat work integrating stop-motion animation into a VR context. It turns out that the real-world textures, lighting, and other cues can help make objects seem more real than just a collage of polygons would. And one of the coolest applications was actually an extension of the cardboard viewer: a 3D printed overlay for a tablet computer that allows the top third of the screen to function as a shareable VR platform, while the lower part is visible by everyone in a small group. This “casual VR”, where people can pass the tablet around without having to strap on invasive headsets, promises to make the technology a much better fit for ad-hoc group collaboration.

The new boom in VR didn’t come out of nowhere — it came out of work done across research labs like [David]’s, working in the open and sharing their innovations. These are folks who’ve been working on VR since the 1960’s, and the ideas behind the new crop of headsets are nearly that old. The technology has caught up, with higher resolution screens and better graphic processing, of course. But what really drove companies to invest, compete with each other, and eventually drive the revolution forward, is that prototypes were built that demonstrated the possibilities of a less-expensive VR experience. How’s that for a moral to warm the hacker’s heart?

18 thoughts on “David Krum: The Revolution In Virtual Reality”