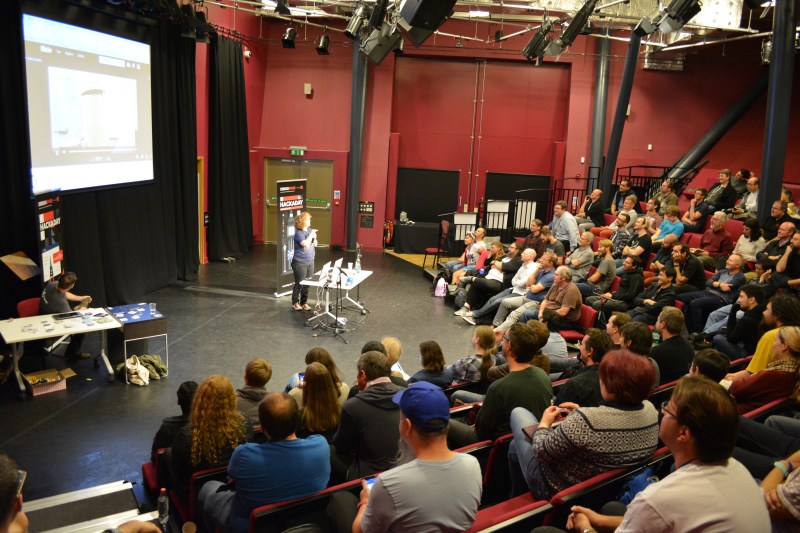 “Varied and interesting” does not even begin to cover the breadth of projects, and expertise covered by you, our readers. It is a constant surprise and delight as a Hackaday editor to see new and interesting fields covered through Hackaday.io projects, and that diversity carried through into this event, with a continuous flow of speakers covering everything from digital privacy through laser-enhanced Nintendo zappers and robotic telepresence devices to stem cell research. We love our community!

The trouble is, with so many attendees and so many high-quality talks, where do we start in trying to describe them? It is probably best then to present an overview from a personal viewpoint, those talks that most stuck in my mind, and to present my apologies to those others who I simply don’t have the space in which to mention.

Perhaps the best place to start as a hardware enthusiast is with the three PCB-related speakers to whom I would have gladly listened to for far longer than the allotted seven minutes. [Saar Drimer] is a name some of you may recognise from his professional life as the Boldport electronic design agency, and he had brought along a variety of his more artistic work including a super-sized PCB for a museum display and a PCB trophy he’d created in the past for our sponsor. His talk though covered the ingenious design of his Monarch soldering kit, a PCB flashing-light butterfly.

[Roger Thornton] is someone whose work you may well be familiar with even if you do not immediately recognise his name. As the Raspberry Pi Foundation’s principal hardware engineer it is his hand you see on a Raspberry Pi board, and his talk gave us a unique insight into the design of the Raspberry Pi Zero. Fitting a wireless chipset onto an already tiny board while keeping components on only one side and costs to a minimum turns out to be a task fraught with difficulty.

Then to [Mike Harrison], who you may know as [Mike’s Electric Stuff] from his YouTube channel. His attention had been captured by a new line of tiny surface-mount white LEDs in a supplier catalogue, which had sent him down a flight of fancy into the world of tiny densely-packed PCB matrices of grain-of-dust lighting. This might sound like a straightforward piece of design work, but the density involved also necessitated a close-spaced grid of PCB vias, around which on the other side of the board he had to lay his drive circuitry. The results were both beautiful and bright little screens, as well as an increasingly intricate range of little boards.

Security and privacy talks also featured on the agenda, with [Joe Fitz] showing us why not even hardware-based two-factor authentication should be viewed as entirely trustworthy, with a beautifully-executed little wireless backdoor PCB for those RSA SecurID tokens. Then [Dana Polatin-Reuben], whose day job is with Privacy International, laid out some of the more chilling aspects of the ubiquitous data collection by manufacturers of IoT devices.

A couple of memorable talks centered around LED projects. [Alex Eames] of [Raspi.tv] fame showed us his LED bike lights, which of course are much more than mere lighting. [Alex]’s bike has indicators and a brake light, and because he abhors wiring and wants the convenience of removable bike lights, the front and rear units form the two halves of a wireless network. And then there was [Rachel Wong] talking about her wearable tech, though of course that was only half of what she covered. Her day job is as a stem cell scientist, of which cutting-edge work she gave us a brief flavour.

We had some robotics talks, [Libby Miller] demonstrated her [LibbyBot], an engaging telepresence bot created using an IKEA lamp, and [Neil Lambeth] gave us the low-down on robot football, with of course a supporting cast of robots.

As a Hackaday editor it was particularly good to meet some of the rest of the team, as we are spread across the globe. Our editor-in-chief [Mike Szczys] told us about his work on digital logic from first principles with discrete components, while managing editor [Elliot Williams] showed us his flip-dot display talk timer, unusually programmed in FORTH. Meanwhile our contributor-at-large [Alasdair Allan] delivered a cautionary tale on the dangers of trusting IoT data, and contributor [Adil Malik] showed us his rather beautiful three-phase power monitor. Then when it was my turn, for some light relief I eschewed hardware projects, and entertained the masses with a tale about cider.

Finally, a notable talk came from [James Larsson], who you may recognise as the originator of the Flashing Light Prize. He had an announcement, of the 2018 contest, which must involve neon lamps and a 1 Hz flash rate with a 50% duty cycle. Hackers, start your oscillators!

So the crowd that spilled out of the auditorium into the September night and made their way across to a nearby pub came away having had an edifying and entertaining day. There were people from all sides of our community present, people whose work we’d featured, and readers who had made the trek to London simply for the spectacle. We settled down for an evening of socialising over a pint or two of rather good craft ale, we Hackaday staffers having something of a need to relax after a day on our feet.

On behalf of Hackaday I’d like to extend our thanks to our sponsor DesignSpark, who made it possible to run a conference without charging for tickets, Canada Water Culture Space, whose staff provided the support that ensured everything ran smoothly, and finally to you, our readers and attendees. You make us who we are, and events like this one allow us to better remain in touch with you.

Our next global event will be the upcoming Hackaday Superconference in California in November. Our British readers can rest assured that this will not be the last time you will see us.