Good ol’ Kwikset-standard locks were introduced in 1946 and enjoyed a decades-long security by obscurity. The technology still stands today as a ubiquitous and fairly minimal level of security. It’s the simplest of the various standards (e.g., Master, Schlage, etc.) with a mere five pins with values ranging from 1 (not cut down hardly at all) to 7 (cut deeply). This relative simplicity made the Kwikset the ideal platform for [Dave Pedu] to test his 3D-printed keys. 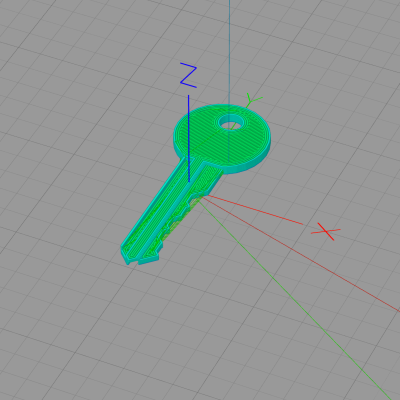 Rather than simply duplicating an existing key, [Dave] created a parametric key blank in OpenSCAD; he just enters his pin settings and the model generator creates the print file. He printed ABS on a glass plate with a schmeer of acetone on it, and .15mm layer heights. Another reason [Dave] chose Kwikset is that the one he had was super old and super loose — he theorizes that a newer, tighter lock might simply break the key.

So, a reminder: Don’t post a picture of your keys on the socials since at this point it’s certainly possible to script the entire process from selecting a picture to pulling the key off the print bed. Looking to technology won’t save you either; Bluetooth locks aren’t much better.