If you could pick a news story you would prefer not to be woken with, it’s likely that a major airport being closed due to a drone sighting would be high on the list. But that’s the news this morning: London’s Gatwick airport has spent most of the night and into the morning closed due to repeated sightings. Police are saying that the flights appear to have been deliberate, but not terror-related.

We’ve written on reports of drone near-misses with aircraft here back in 2016, and indeed we’ve even brought news of a previous runway closure at Gatwick. But it seems that this incident is of greater severity, over a much longer period, and even potentially involving more than one machine. The effect that it could have on those in our community who are multirotor fliers could be significant, and thus it is a huge concern aside from the potential for mishap in the skies above London’s second largest airport.

It is safe to say that if there was indeed a multirotor above Gatwick last night then its operator should be brought to justice and face the appropriate penalty without delay. Responsible fliers are painfully aware of the rules involving multirotor flight, and that airports of any description are strictly off-limits. It matters not whether this was a drunken prank or a premeditated crime, we hope you’ll all join us in saying that anybody flying outside the law should be reported to the authorities. 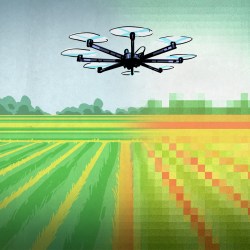 Something that comes as a surprise is that the airport has no means of detecting and neutralising any marauding multirotors. Instead we are relying on eyewitness reports, which as our 2016 investigation linked above concluded are not always reliable. It should not be impossible to detect an incursion given the huge resources of an airport operating company and a national air traffic regulator, that seemingly nothing has been done comes as a significant surprise. When a GPS-equipped machine will obediently return to its take-off point when jammed with a directional RF source to the point of losing signal, perhaps it even offers the chance to catch any miscreants red-handed. All we are left with here are those eye-witness reports, which leads to the perennial question of proof. If this was a drone strike, show us the drone.

We hope that this incident is reported and investigated responsibly and is not taken as an excuse for hasty knee-jerk rule changes. As we wrote in the piece from 2016 linked above, there is a toxic mix of sloppy investigation and institutional axes to grind surrounding drones. And though we congratulate the BBC on their balanced approach on this morning’s radio reporting, there’s been some bad journalism when it comes to multirotors and the users at our level are invariably left without a voice.

Enacting more laws because “Something Must Be Done!” will make both politicians and tabloid readers feel better, but will do little except make life difficult for legitimate users. If we could have a present in our Christmas stockings this year it would not be redundant new laws, instead it would be effective enforcement of the existing ones, which are pretty clear on what constitutes a crime.