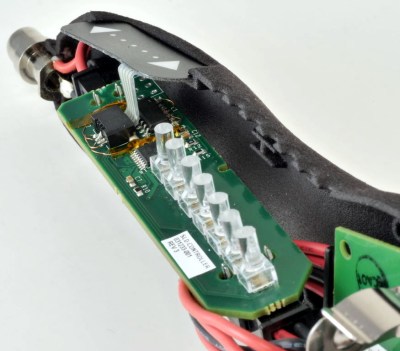 With the addition of new tips and its adjustable power level, the Solderdoodle Plus can also be used for other tasks where precise directed heat can be useful. In the video after the break, [Isaac] shows off a “scooper tip” and a low power setting on the iron which is specifically intended for cleaning up strings and imperfections on 3D printed parts without melting the part itself. If you dabble in the dead trees, there’s also a sharp tip which can be used for your pyrography projects.

Internally the Solderdoodle Plus features a custom charge controller based on the Maxim MAX8903G, and the control board is powered by an ATtiny84A microcontroller. It also makes use of the Interlink FSLP 34-00003, a turn-key touch sensor module, and some very slick Bivar VLP-350-F light pipes for the clever LED “bar graph” interface. Overall this isn’t something you’ll be building from what’s kicking around the parts bin, but all the information is available for you to spin up your own Solderdoodle Plus if you don’t mind sourcing all the parts and getting the boards made.

Since we brought you word of the original Solderdoodle, a lot of progress has been made in the world of portable irons. The TS100 has become a favorite of hackers the world over, which has naturally inspired some very impressive DIY clones, and you can even get USB powered irons for as little as $5 USD. The Solderdoodle Plus has some serious competition this time around, but we’re always happy to root for the open source underdog. Judging by the fact the Kickstarter was fully funded in less than 24 hours, it seems we aren’t alone.