Recently there’s been some buzz in the news that Pepsi, or more accurately the company’s Russian division, had partnered with a startup by the name of StartRocket to experiment with the idea of putting “billboards” in space. After overwhelmingly negative response to the idea on social media, Pepsi’s official line is that the StartRocket experiment was a one-time partnership, and that the company has no plans to push ahead with a space advertising program “at this time”.

Had this been the first time a worldwide conglomerate like Pepsi had turned their eyes up into the black and saw dollar signs, you might think that humanity’s brief flirtation with space-bound advertisements was nothing but a social media stunt. But the truth of the matter is that companies such as Coca-Cola and Pizza Hut have been trying to get their products off terra firma since the 1980’s. This isn’t even Pepsi’s first attempt, despite what their PR department might want you to believe right about now.

So why haven’t we seen advertisers putting their money into space advertising schemes? Well, we have, actually. They just haven’t been terribly effective and the average person likely has no recollection of them. We’re seeing considerable excitement about spaceflight in the new media right now with billionaires like Elon Musk and Jeff Bezos battling to see who can build the most outlandish rockets, but historically, you’d do better getting a 10 second spot during the Super Bowl than plastering your logo on the side of a weather satellite.

In honor of Pepsi’s recent blunder, let’s take a look at some of the standout attempts to conquer advertising’s true true final frontier from the last few decades.

Soda Wars: A New Can 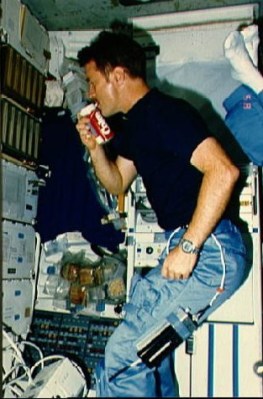 While public interest in human spaceflight has never been higher than during the lead up to the Moon landing in 1969, the early years of the Space Shuttle program certainly weren’t far behind. The Space Shuttle was the perfect embodiment of America in the 1980’s, an extravagant symbol of technological and economic might unlike anything the world had ever seen. In those days you’d have been hard pressed to find a child’s bedroom in the United States that didn’t have imagery of the Shuttle on the walls or the bedspread; it was a bona fide icon, and companies quickly realized that getting their products aboard a Shuttle mission was a guaranteed way to generate interest with a younger audience.

In 1985, Coke secured a deal with NASA to provide soft drinks for Space Shuttle crews, marking the first time carbonated beverages would be consumed off-world. Unfortunately, it’s a bit harder than just tossing a case of the bubbly into the Shuttle’s cargo bay. In space, the bubbles in a carbonated drink don’t rise to the surface, they remain suspended in the liquid and create an unpleasant clump of gas. This effect was actually demonstrated by none other than Richard “Lord British” Garriott during his 2008 flight to the International Space Station. 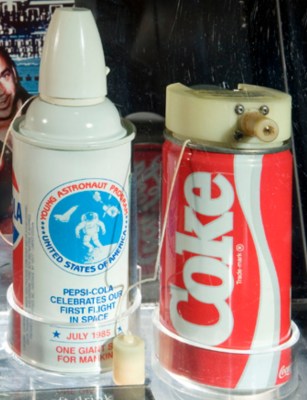 To combat this, Coke reportedly spent around $250,000 USD to develop a special dispenser that would allow astronauts to squirt the sugary goodness directly into their mouths. Ostensibly, the goal of the project was to give astronauts a “taste of home” during their missions. But realistically, paying a quarter of a million dollars to get footage of crews aboard the Shuttle drinking from the red dispensers emblazoned with what’s arguably the most recognizable logo in the world was likely considered one of the best advertising deals in human history. Of course, once Pepsi heard about the deal, they wanted in. They also designed their own space drink on a somewhat accelerated timetable, which may explain its close resemblance to a contemporary shaving cream can.

The exact details of how both of these cans actually worked is still something of mystery, but the general idea is that they created carbon dioxide on demand with the classic baking soda and acid reaction, the pressure of which would carbonate the flat soda while forcing it out of the nozzle. This rush of gas and liquid was intended to better approximate the experience of drinking a carbonated beverage on Earth. Unfortunately, neither can proved to be popular with the astronauts during testing, so the experiment was ultimately considered a failure and space remains a cola-free zone to this day.

The Soda Space Race is the high water mark in terms of money and effort put into space-based advertisements, at least so far. But other companies have used far less extravagant ways to get their name attached to space activities since then. In fact, the most common method of getting your brand in space is the same way you do it on the race track: toss the operator of the vehicle enough money, and they’ll put your logos all over it.

In 1990, the Tokyo Broadcasting System decided to put one of their reporters on the Soyuz TM-11 mission headed to the Mir space station. Booking a seat to space isn’t cheap, and looking to get the most out of their considerable investment, they asked to have their logo placed on the outside of the rocket so it would be seen during live coverage of the launch. Hearing that the Soviet Union was willing to sell advertisement space on one of their launch vehicles, several other Japanese companies including Sony jumped at the opportunity and made their own deals.

Of course, the problem with putting your logo on the outside of a rocket is that it doesn’t get seen for long. Even among the relatively small percentage of consumers who are likely to watch live coverage of a space launch, most aren’t going to be paying very close attention until the final few seconds before ignition. Once the engines are lit, the rocket is going to be up and out of visual range in a matter of seconds. 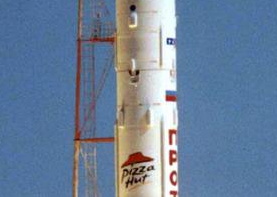 That being said, if you’re thinking of spending the money to put your logo on a rocket, it would make sense to wait until an important mission comes along. Something that is likely to have increased media coverage, and if you’re really lucky, a spot in the history books. The list of missions with that sort of significance is relatively short, but the launches that put the very first components of the International Space Station into orbit were certainly among them.

With the assumption that construction of the Space Station would captivate millions of consumers, Pizza Hut figured it was a good a time as any to throw their hat into the space advertisement game. In 2000 the company paid an undisclosed sum to have a 30 foot version of their logo placed on the side of the Proton rocket that carried the Zvezda module into orbit, and then a year later “delivered” one of their pizzas to the fledgling Space Station aboard another flight. At the time, Pizza Hut chief marketing officer Randy Gier made the rather bold claim that “Wherever there is life, there will be Pizza Hut pizza.”

Lighting Up the Night

Space drinks and rockets with logos on them are all well and good, but how much longer until giant billboards in orbit block out the stars and deliver us into the true cyberpunk dystopia we’ve been promised? While such a feat is likely within our current technical capabilities, it wouldn’t exactly be easy, and definitely not cheap. The basic idea would be to create a deployable structure, almost certainly made of mylar, which could be expanded after being placed into orbit. Initial research performed in the 1990’s by the now defunct Space Marketing Inc claimed that such a structure would need a surface area of approximately one square kilometer to have the same apparent size and brightness of the Moon.

Even if you could build such a structure and successfully unfurl it in space, it wouldn’t last long. Anything large enough to be seen from the surface will have so much surface area that it will be absolutely pelted with space debris. Keeping it in a stable orbit would also be difficult, as it would essentially be a solar sail. Most experts believe that such a craft could only survive for a week or two in orbit, but then, we probably wouldn’t want them hanging around for longer than that anyway.

But perhaps most importantly, such advertisements would actually be illegal to launch, at least in the US. According to Title 51, section 50911 of the United States Code:

No holder of a license under this chapter may launch a payload containing any material to be used for purposes of obtrusive space advertising.

It goes on to explain that advertisements on spacecraft or launchpads is fine, but no US launch provider (i.e. SpaceX) can knowingly put something into orbit that is specifically designed to be a ground-observable advertisement.

In reality, nobody wants to look up at the night sky and see a glowing billboard where Ursa Major should be. Even if one could be built cheaply enough and launched from a country that hasn’t specifically outlawed it, the public reception would likely be so negative that it would go down as one of the worst PR disasters in history. The knowledge that Pepsi was even thinking about it was enough to cause a major backlash.

That being said, a company putting their logo on rockets and spacecraft, or arranging for an astronaut to use their products during a televised mission is much more in line with the terrestrial advertisements we’re used to. The reason these attempts failed to gain widespread attention in the past could simply have been because they were ideas ahead of their time, before the advent of social media and viral videos. In an era where rocket launches are live streamed on YouTube and with NASA’s stated goal to return humans to the Moon with the help of commercial partners, putting your brand in space might make more sense now than it ever did in the 1980s.

34 thoughts on “This Space For Rent: Advertisements In Orbit”