Large machine tools are often built to last a very long time, so it is not uncommon to find a lathe made in the 19th century still providing faithful service. The fundamental job of a lathe has not changed significantly in the intervening years, even though a modern lathe will have more features than its hundred-year-old equivalent. 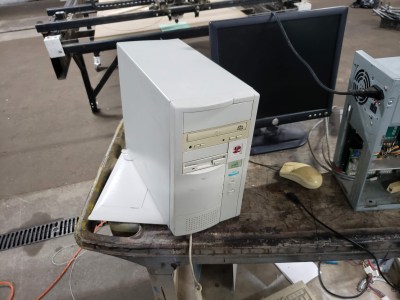 This is not the case for CNC machine tools. When computer numerical control was wedded with old iron machine tools, the control hardware was doomed to quickly become antique or vintage. From the user interfaces to the control circuitry, in the world of electronics new features quickly become obsolete. [Evan] has a ShopBot CNC wood router from the mid 1990s that he describes as an antique, and his tale of its restoration is both a fascinating look at the changes in small-scale CNC control over two decades as well as something of a primer for anyone considering a similar upgrade.

The controller is a pair of beige-box PC cases that scream “I love the 90’s!”. One contains a socket-7 PC running Windows 95, and the other houses the ShopBot controller; an 80c32 dev board with ShopBot firmware, coupled to a set of motor controller boards, which unlike today’s controllers expect raw quadrature inputs. His aim was to replace the vintage hardware with a modern alternative. An Arduino Mega running grbl to talks to the ShopBot controllers by way of a small piece of electronics to condition quadrature data from the step and direction lines it provided. The result may not be as good as a router from 2019, but it did save this aging tool from retirement.

10 thoughts on “In The Fast Moving World Of CNC, This Restored Router Is An Antique”