In New Orleans, a Loyola University professor has been creating original art out of glow-in-the-dark fish gut bacteria, enough to fill 1000 Petri dishes. Her first major foray into art was biomorphic abstractions, inspired by Impressionist painters, with her current work reflecting much of the abstraction of the earlier style.

The bacteria comes from the Pacific Rock Fish and glows a vibrant electric-blue. It is typically kept in a freezer and has a texture and color similar to water when it’s being used. The luminescence only lasts for 24 hours, presenting timing challenges when preparing artwork for a photoshoot, as artist [Hunter Cole] often does. With a Q-tip, [Cole] paints roses, lilies, and insects onto the Petri dishes and arranges them for surreal photography shoots. In addition to painting shapes in agar, she uses a light painting technique by filling clear water bottles with the bacteria for long-exposure shots.

[Cole] is planning on presenting her work at an art exhibit in New Orleans, along with showcasing a performance piece featuring models clad in chandelier-like costumes glowing with bioluminescent bacteria in petri dishes. 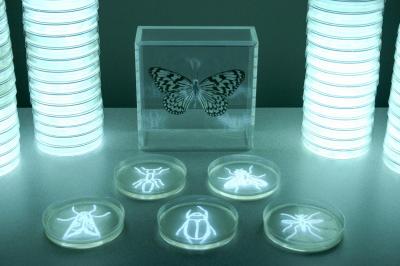