You may remember seeing the Open Book back in October when Tom Nardi looked in on early testing for the board. It was prototyped using the Adafruit Feather, which of course was the main requirement of the contest. The controller is now built into the board for standalone functionality with the Feather header providing an opportunity for expansion.

The screen is 4.2″ with a resolution of 300×400. It reads files from a microSD card and uses seven buttons on the front of the board for user input. A dedicated flash chip stores language files with the character sets of your choice. The small LiPo cell can be charged via the USB port, and of course e-paper helps greatly in reducing the power consumption of the reader.

You’ll find a few extras on the back. There’s a headphone jack for listening to audio books, and get this, a built-in microphone and a TensorFlow-trained model allow for voice control! There are STEMMA headers to add your own hardware options, and designs for laser-cut and 3D-printed enclosures.

Of Satellites and Long-Distance Comms

Feathers in Space? That’s the goal of the Junebug project which has designed a Feather compatible brain for small satellites. Perhaps most interesting is that it’s designed to function without a battery, something known as intermittent computing. Junebug takes the You’ll Cut Yourself On That Edge title.

In other “far out there” designs is the LoRaWAN Feather, designed to get you and up and running with the long-distance communications protocol that is all the rage these days. If fittingly takes the Wireless Feather title.

Four Legs, One Finger, and a Serial Port

The SpiderWing is sure to give you the creepy-crawlies as it ticks around on four legs made out of twelve micro servos. Perhaps you can control it using another design by the same hacker, the Gesture FeatherWing uses an MCP3030 for an input device that recognizes patterns drawn by your finger. These creations take the Weirdest Feather and the Assistive Technology titles.

A little taste of retro-computing rounds out the top winners. A Serial to Feather board brings the iconic DB9 header to the Feather family. Whether you need a serial connection to an old computer, or want to interface with old input devices or lab equipment, it’s easy to see why this one claims the title of Retro Feather.

This is just the wing tip of what we saw from the Take Flight With Feather contest. With more than 80 entries, you definitely need to check out all the creative ways people found to build their Feather designs. 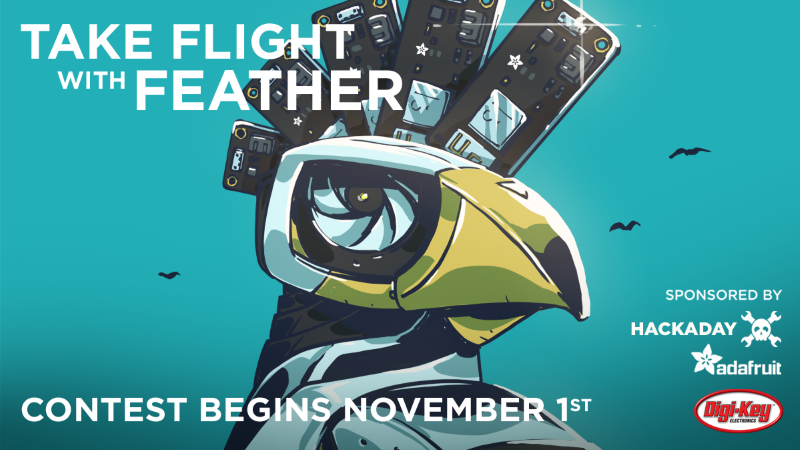 10 thoughts on “Winners Of The Take Flight With Feather Contest”