The Taller, the Better

Outwardly, the ability to turn the kinetic energy of wind into electricity would seem to have little to do with the design decisions made by civil engineers during the Eisenhower administration. But when dealing with wind power, size, or more specifically height, matters. The higher a wind turbine’s hub is above ground level, the more consistent and the faster the wind. A study by the National Renewable Energy Laboratory mapped wind speeds at 110 m and 160 m above ground level (AGL) over the entire country. When compared to the winds at 80 m — about the average height for a big wind turbine these days — the difference is striking. 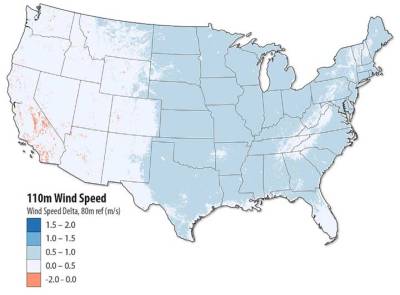 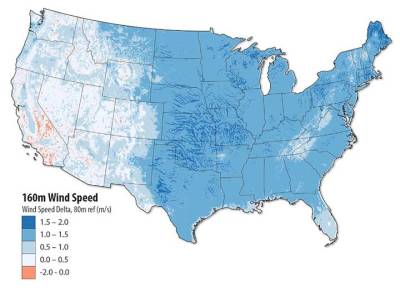 If wind turbines could be lifted up to 160 m AGL, vast swathes of the country could potentially be used for wind energy production. The NREL estimates that taller turbines could generate up to 45% more electricity.

So the need for taller turbines is clear, but building them taller creates other problems. The taller the tower, the wider the base needs to be, to support the massive weight of the machinery above it and to resist the loads placed on it by the wind. The current crop of 80 m turbines has base sections that are about 4.5 m in diameter, which is just shy of the minimum highway overpass height (16 feet, or 4.9 m) specified for Interstate highways. When placed on a low-boy trailer, or on a trailer tailor-made for the job, the lowest sections of the tower just barely scrape underneath some overpasses, making for some interesting moments.

The obvious answer to the need for such large tower base sections is to forget about fabricating them in factories and to just build them on site. And while that’s possible, the economics of construction works against it. The factories that make such huge parts are filled with even bigger machines needed to make them. The workers there are skilled tradespeople working under controlled conditions to produce precision parts that will stand up to enormous loads. Expecting such precision processes to be performed in the middle of a North Dakota cornfield in the middle of February is asking a lot.

As it turns out, though, it may actually be possible to set up a wind-turbine tower factory on the job site. General Electric, in cooperation with building materials company LafargeHolcim and construction 3D-printing concern COBOD, has recently announced plans to 3D-print the lower sections of wind turbine towers up to 200 meters tall. Their first prototype, a ten-meter tall tapering cylinder of extruded concrete, was printed in late 2019 at COBOD’s Copenhagen facility, was printed using the company’s BOD2 modular gantry printer.

The BOD2 printer was originally designed to print entire structures, from houses to small office buildings, onsite with minimal need for skilled trades. Depending on how the 2.5 m modules for the X- and Y-axes are configured, the BOD2 can print structures up to 14 m by 50 m, so it should be plenty big enough to print the base sections for even the largest wind turbine towers. Once the base sections are printed on-site to a height where the diameter narrows to less than 4.5 m, traditional prefabricated sections will presumably be transported to the site and assembled on top of the extruded pedestal.

There’s obviously a lot of engineering to be done to make sure this hybrid approach will support the loads that such large wind turbines will experience. But it seems like a clever use of a technology that, frankly, has always seemed to us to be a non-starter in terms of its ability to produce buildings that are attractive enough for people to actually want to live and work in them. Such a utilitarian application seems to be the perfect use case for large-scale 3D printing, and we’re eager to see if it pays off in the long run.