A new study from West Virginia University (WVU) Rockefeller Neuroscience Institute (RNI) uses a wearable device and artificial intelligence (AI) to predict COVID-19 up to 3 days before symptoms occur. The study has been an impressive undertaking involving over 1000 health care workers and frontline workers in hospitals across New York, Philadelphia, Nashville, and other critical COVID-19 hotspots. 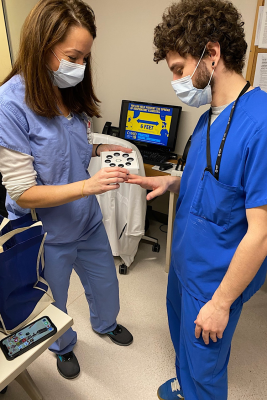 The implementation of the digital health platform uses a custom smartphone application coupled with an Ōura smart ring to monitor biometric signals such as respiration and temperature. The platform also assesses psychological, cognitive, and behavioral data through surveys administered through a smartphone application.

We know that wearables tend to suffer from a lack of accuracy, particularly during activity. However, the Ōura ring appears to take measurements while the user is very still, especially during sleep. This presents an advantage as the accuracy of wearable devices greatly improves when the user isn’t moving. RNI noted that the Ōura ring has been the most accurate device they have tested.

Given some of the early warning signals for COVID-19 are fever and respiratory distress, it would make sense that a device able to measure respiration and temperature could be used as an early detector of COVID-19. In fact, we’ve seen a few wearable device companies attempt much of what RNI is doing as well as a few DIY attempts. RNI’s study has probably been the most thorough work released so far, but we’re sure that many more are upcoming.

The initial phase of the study was deployed among healthcare and frontline workers but is now open to the general public. Meanwhile the National Basketball Association (NBA) is coordinating its re-opening efforts using Ōura’s technology.