It appears that every great console is bound to get a miniature remake: we’ve had the PlayStation Classic, the Mini NES and SNES, and even a miniature Sega Genesis/Mega Drive. But one great console that was sorely missing from that list, at least according to [Brendan], was the Vectrex. So he went ahead and built a fully-functioning miniature Vectrex Console.

If the name “Vectrex” doesn’t ring a bell in your mind, you’re not alone: a commercial failure, it was quickly forgotten by most following the 1983 video game crash. But it has retained a cult status among enthusiasts due to its unique design featuring a monochrome vector monitor, onto which you can place transparent overlays to obtain a sort-of color display. Its games can now all be emulated using software like RetroPie, which is what [Brendan] chose to run on a Raspberry Pi Model 2 that he had lying around. 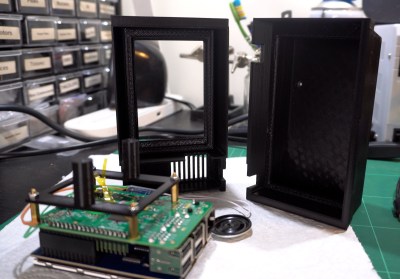 As for the display, he settled on a Pi-compatible 3.5″ TFT device. Hooking it up to the Pi was easy enough, but getting the image rendered in its proper portrait orientation was quite a headache, requiring endless fiddling with drivers and configuration files.

Once he got this working, [Brendan] set to work designing a miniature copy of the Vectrex’s original case. It took a few iterations and several 10-hour runs on his 3D printer before he ended up with a sturdy case that securely held the Pi and its display in place. A few more hours of printing later he also had a handheld controller, which he based on an Arduino Pro Mega. The Arduino reads out four regular pushbuttons and a joystick, and communicates with the Pi through a coiled USB cable.

The end result, as you can see in the video embedded below, is the cutest little Vectrex we’ve ever seen. It’s really the opposite of this big-screen Vectrex project. We’ve also seen a Vectrex projector, and even one with a real color monitor hacked in.

16 thoughts on “Finally, The Venerable Vectrex Gets A Mini Makeover”