Medical equipment often makes for interesting teardown videos: the strict requirements imposed by certification bodies mean you’ll find good quality components and a high standard of design and manufacturing. But when [Buy It Fix It] bought an ultrasound scanner on eBay, he wasn’t interested in tearing it down: his plan was to use it to find out if his sheep are in lamb, so he went on to repair it and modify it for its new purpose.

The device in question is a Mediwatch Bardscan II, which is meant to be used for scanning people’s bladders. The mainboard has a completely different model number however, which suggests that the basic design is used for several types of ultrasound scanners. The system is powered by an AMD Geode processor that runs Windows XP Embedded stored on a CompactFlash card, so examining the internal software is easy: the scanner interface even runs on a regular Windows PC. 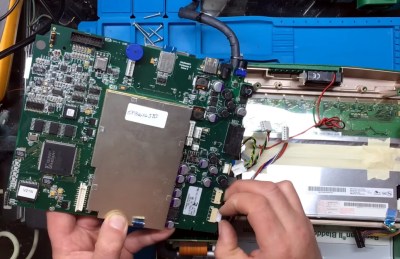 Several files on the internal drive point at hidden features, with filenames like kidney.dib and liver.dib indicating that the instrument can scan more than just bladders. The drive also holds several versions of the scanning app, as well as a .ini file in which lots of features can be enabled or disabled. By running the executable through x32dbg, [Buy It Fix It] was even able to recover the password to enable the “Advanced Settings” menu — it’s “u10” in case you were wondering.

With a bit of file editing, [Buy It Fix It] managed to turn the rather basic system into a way more flexible ultrasound scanner. For example, he can now adjust the scan depth, replay previous scans and make notes on top of any captured images. It can even run DOOM, as he demonstrates at the end of the video — though we can imagine his sheep might not enjoy the sight of their owner approaching them with a box full of flame-throwing demons.

Medical ultrasound scanners, which have been around for quite a while, may appear to be complex machines, but it is possible to make a simple version with easily available components.