[Brook Drumm] of Printrbot is teasing a new 3D printer. This is no ordinary 3D printer; this is an infinite build volume 3D printer, the Next Big Thing™ in desktop fabrication.

The world was introduced to the infinite build volume 3D printer last March at the Midwest RepRap Festival with a built by [Bill Steele] from Polar 3D. The design of [Bill]’s printer began as simply a middle finger to MakerBot’s Automated Build Platform patent. This was patent engineering — [Bill] noticed the MakerBot patent didn’t cover build plates that weren’t offset to the plane of the print head, and it just so happened a printer with a tilted bed could also build infinitely long plastic parts.

While [Bill Steele]’s unnamed printer introduced the idea of an infinite build volume printer to the community, a few pieces of prior art popped up in the weeks and months after MRRF. Several years ago, [Andreas Bastian] developed the Lum Printer, an unbounded conveyor belt printer. A month after MRRF, Blackbelt 3D introduced their mega-scale tilted bed printer and later started a Kickstarter that has already reached $100,000 in pledges.

Right now, details are sparse on the Printrbelt, but there are a few educated guesses we can make. The belt of the Printrbelt appears to be Kapton film attached to some sort of substrate. The hotend and extruder are standard Printrbot accouterments, and the conveyor is powered by a geared stepper motor. All in all, pretty much what you would expect.

We do know that [Brook] and [Bill Steele] are working together on this printer, apparently with [Brook] in charge of the hardware and [Bill] taking either his slicing algorithm or firmware modifications (we’re not exactly sure where the ’tilt’ in the Gcode comes from) and getting this printer running.

While the Printrbelt isn’t ready for production quite yet, this is a fantastic advance in the state of consumer, desktop 3D printing. You can check out [Brook]’s teaser videos below.

END_OF_DOCUMENT_TOKEN_TO_BE_REPLACED 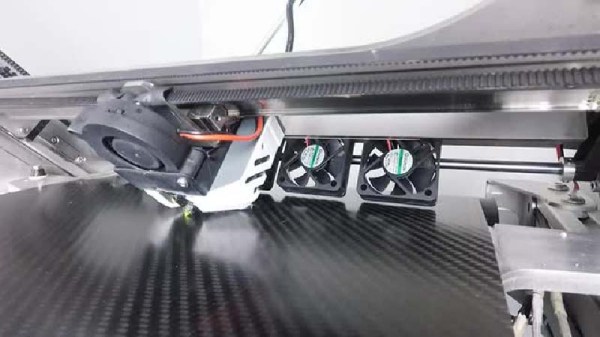 Last week, the Blackbelt 3D printer launched on Kickstarter. What makes the Blackbelt 3D printer different than any other 3D printer on Kickstarter? This printer has an infinite build volume. It’s built for continuous production. As long as you have a large enough spool of filament, this printer will keep producing plastic parts with no downtime in between. The Blackbelt is a truly remarkable and innovative machine. Yes, it’s a bit expensive, but it’s designed for production and manufacturing, not some guy tinkering in his garage.

However, the Blackbelt 3D website includes two words that have sent the 3D printer community into an uproar. ‘Patent Pending’ is something no one in the community wants to see given the history of the industry and a few poor decisions from the first movers during the great 3D printer awakening of 2010. The idea of an infinite build volume printer that allows for continuous production is not new; we saw one last March at the Midwest RepRap Festival. The question, therefore, is what is covered by the upcoming Blackbelt patents, what is the prior art, and is it still possible to build an Open Source printer that uses these innovative techniques?

END_OF_DOCUMENT_TOKEN_TO_BE_REPLACED 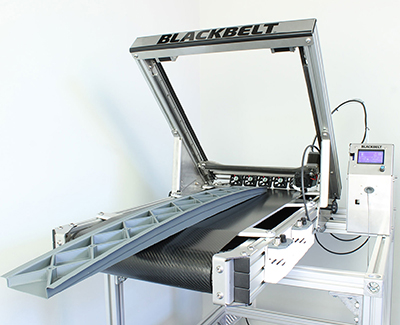 The specs on this printer are about what you would expect from a large machine meant for industry or prototyping, as opposed to a machine designed to print out tugboats and fidget spinners. The Blackbelt uses interchangeable print heads for the hotend with 0.4, 0.6 or 0.8 mm nozzles. The filament feed is a Bowden with the extruder hidden under the control panel. The frame is explicitly Bosch extrusion, and the machine’s build volume is 340 mm by 340 mm by whatever. Retail price (on Kickstarter) comes in at €9,500, but for an extra €3,000 you can also get a neat stand with casters on the bottom. Of course, with an infinite build volume, you could also print a stand. END_OF_DOCUMENT_TOKEN_TO_BE_REPLACED