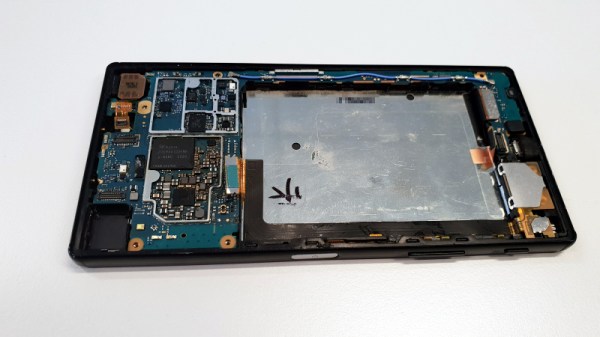 We’ve probably all got at least one old cell phone lurking somewhere around our bench. In most cases they’ll still work, but their  batteries may be exhausted and their OS could be an ancient version. But sometimes there will be a phone that just died. One minute the flagship model, the next a useless slab of plastic and glass with the added annoyance of those priceless photos of Aunty May’s 80th forever locked in its memory.

[Andras Kabai] had just such a device land on his desk, a high-end Sony whose screen had gone blank. Others had tried, he was the last hope for the data it contained. He zoomed in on the eMMC chip on its motherboard, desoldered it and hooked it up via a specialist eMMC reader to recover those files. That was a very simple description of a far more involved process that he sets out in his post about it, a post that is fascinating reading and serves as a handy primer for any reader who might like to try it for themselves. We learn about the MMC interface and how simple it can be in its serial form, how with some fine soldering you can use a cheap USB reader, and that eMMC chips have a pinout conforming to a JEDEC standard.

Finally we see the software side as he takes the various SQLite databases and extracts the data for the user. It shows, all is not necessarily lost, however dead a phone may be.

We’ve seen [Andras] before, using an old scanner in his PCB fab.