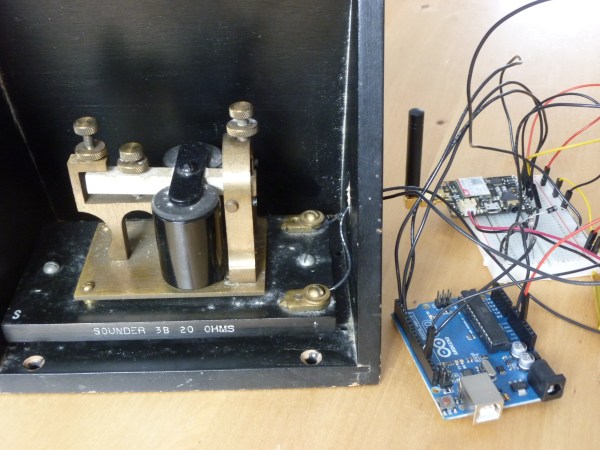 If you find yourself glued to social media and also wish to know Morse code… we can think of no better invention to help hone your skills than the Twitter Telegraph. This vintage to pop culture mashup by [Devon Elliott] is a recent project that uses a sounder from the 19th century to communicate incoming tweets with dots and dashes.

Back in the day when everyone was connected by wire, the sounder was a device on the receiving end of the telegraph which translated the incoming signal to an audible clicking. Two tall coils sat with a metal tab teetering between them. When electricity surged into one of the coils it would magnetize, pulling the tab downward in a pattern which mimicked the incoming current sent from the other end. [Devon] decided to liberate the sounder from its string-and-two-can origins and use a more modern source of input. By adding a FONA board which comes equipped with a SIM card, the device was capable of connecting and receiving data from the Internet. An Arduino is responsible for taking the data received and translating it into Morse code using the Mark Fickett’s Arduinomorse library, and then sending it out through an I/O pin to the sounder itself to be tapped.

The finished project is connected to a cellular network which it uses to receive SMS messages and tweets. By mentioning the handle @ldntelegraphco you can send the Twitter Telegraph your own message which will be tapped in code for everyone in the vicinity to hear… which is worth giving a try for those of you curious types. Lastly, if you have an interest in taking a look at the code for your own use, it is available on [Devon’s] github.