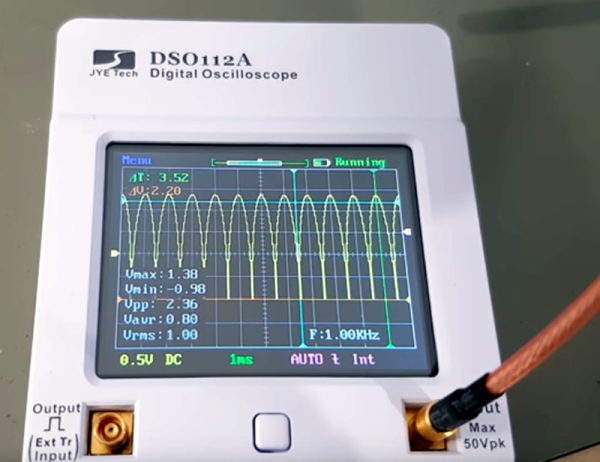 [Marco Reps] didn’t want to lug a full-sized oscilloscope around to measure his ECG while running. He decided to check out the DSO112A which is a tiny touchscreen scope from the usual China sources. The tiny one channel scope can go to 2mV/division at 2MHz and can save and recall up to 24 configurations. It also has access to the data via a serial port so you can use it as a fancy data logger. [Marco’s] video appears below.

Apparently, there is was an older model without the A on the end that was not as sensitive and had some other missing features. The price is about $70–fairly inexpensive, although not throw-away cheap.

[Marco] noted that one of the two small connectors can act as an external trigger input or a function generator. There’s the typical LiPo battery inside and a shielded input section. [Marco] tears the board down and looks at the chips on the board. Inside are two Atmel CPUs and a 20 megasample per second analog to digital converter.

The color screen looks surprisingly good in the video although, as [Marco] points out, with one channel, the colors aren’t super useful. The device also has cursors and a nice selection of measurements that work both live and on stored data.

At the end of the video, [Marco] shows a simple ECG amplifier he built from an open source schematic. We’ve covered simple ECG circuits before if you want to read more.

Last year we looked at two small inexpensive scopes. Like everything else, each year the bar gets higher. Although, in fairness, those scopes had a (reported) 25 MHz bandwidth. We’d love to see that kind of front end with the user interface of the DSO112A.