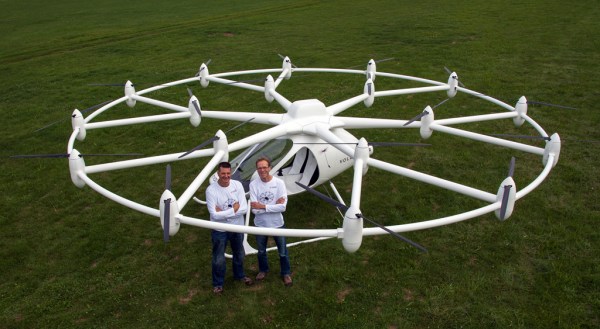 The e-volo VC200 has made it’s maiden unmanned flight. Does the craft above look a bit familiar? We first reported on the e-volo team back in 2011. Things have been going great for the team since then. They’ve created an 18 motor (Octadecacopter?) prototype dubbed the VC200. The group has taken a smart approach to building their craft. Rather than try to keep everything in-house, they’ve created a network by partnering with a number of companies who are experts in their fields. A sailplane company laid up the carbon fiber composite frame for the EC200. Junkers Profly, a German aviation company, developed a ballistic parachute system in case something goes wrong in flight.

From the outside, the VC200 looks like a grown up version of the Quadcopters we’ve seen here on Hackaday. Even the control system used for the test flight looks like a modified Radio Control Transmitter. The motors are outrunner brushless motors. Props are carbon fiber. We’re hoping the control system is a bit more evolved (and redundant) than the systems used in R/C quads though. Just like in smaller scale models, batteries are still the limiting factor. The VC200 will only fly for about 20 minutes on a charge. However, e-volo says that new technology should allow it to extend that time to around an hour. Not very much for a cross country flight, but plenty to pioneer a new type of aircraft. Where do we sign for the beta program?