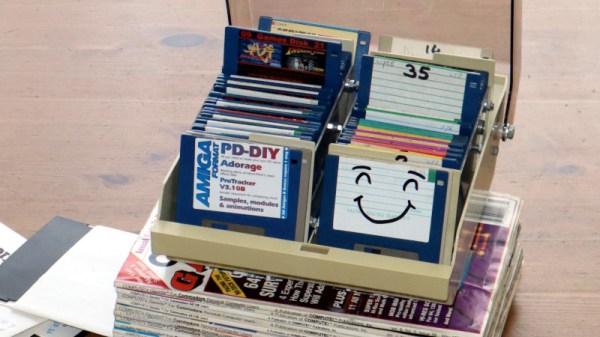 On [Jan Derogee]’s desk is something that wouldn’t look out of place for many of us, a pile of computer magazines with a case of 3.5″ floppy disks on top of it. The causal observer would see nothing more than the detritus of a retrocomputer enthusiast’s existence, but stick around. In fact it’s a clock, and one of the most unusual ones we’ve seen in a long time.

How can a box of floppies tell us the time? Selected disks have custom labels that look as though they might be authentic game collections, but in reality are fakes that carry numbers alongside the game art. An ingenious system of cams hidden in the hollowed out pile of magazines raises the correct floppies to tell the time, hours on the left row and minutes to the closest five minutes on the right. The floppies are modified by the removal of some plastic and the disk itself, because early versions had a habit of shredding disks. A final touch comes in the form of a Nokia phone on the desk next to the clock which plays a tune in lieu of chimes on the hour. You can see the clock in action in the video below the break.