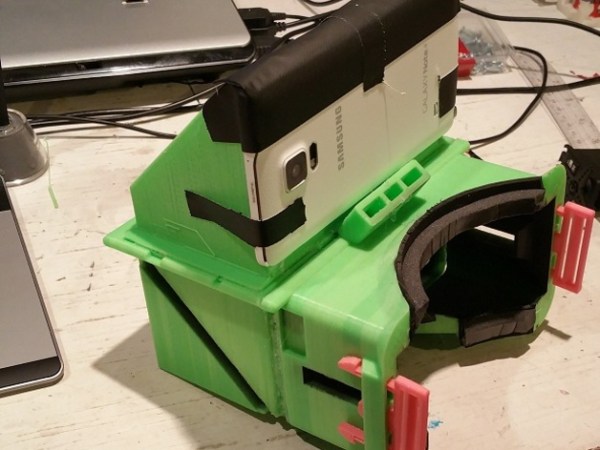 Entirely too excited about Microsoft’s Hololens, the DIY community has leaped on the challenge to make some hardware before the real deal comes out. [Sean Hall] has an excellent 3D printed prototype that makes use of the Pepper’s Ghost illusion to create a “hologram” for this pair of unique VR goggles.

Similar to other DIY virtual reality goggles we’ve seen, [Sean] has 3D printed the enclosure — but instead of slapping the smart phone right in front of your eyes, it’s mounted above the goggles, reflecting off of a mirror and then a piece of transparent plexi-glass, which produces a hologram like effect thanks to the concept of Pepper’s Ghost illusion.

The problem with any of these reflection-based-holograms is they aren’t always that easy to see, so [Sean] is planning to try out some 1-way reflective car tint to get a more visible reflection while still being able to see through the image. He also plans to add gaze tracking with some open-source software called Project Haytham. It’s a depth sensor using a Kinect, head tracking using a Playstation Move and maybe even a leap motion controller for virtual object manipulation.

Check out the current state of this hack in the clip after the break.