If you are under a certain age, you probably associate Radio Shack with cellphones. While Radio Shack never gave us access to the variety and economy of parts we have today, they did have one thing that I wish we could get again: P-Box kits. The obvious questions are: What’s a P-Box and why do I want one? But the kit wasn’t to make a P-Box. P-Box was the kind of box the kit came in. It was like a piece of perfboard, but made of plastic, built into a plastic box. So you bought the kit — which might be a radio or a metal detector — opened the box and then built the kit using the box as the chassis.

The perfboard was pretty coarse, too, because the components were all big discrete components. There was at least one that had an IC, but that came premounted on a PC board that you treated like a big component. One of my favorites was a three-transistor regenerative shortwave receiver. In those days, you could pick up a lot of stations on shortwave and it was one of the best ways at the time to learn more about the world.

On the left, you can see a picture of the radio from the 1975 catalog. You might think $7.95 is crazy cheap, but that was at least a tank full of gas or four movie tickets in those days, and most of us didn’t have a lot of money as kids, so you probably saved your allowance for a few weeks, did chores, or delivered papers to make $8.

The kits changed over the years. In 1975 there were twenty of them, but over the years there were about thirty different kits. In fact, the shortwave radio was a few bucks more than most of them, although there were a few that were even more, but — in 1975, at least — none of them were over $9. 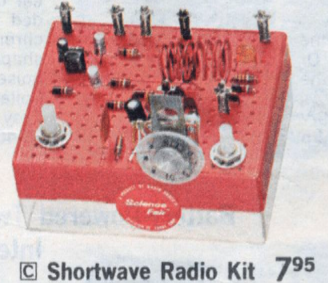 The kits all had a few common features. You were told to use your soldering iron to make holes for the things like pots. Made a mess of your iron and also released oh-so-wholesome fumes. There were little aluminum terminals used for off-box connections. You can see them in some of the pictures above. They had springs that you would push down, insert a wire, and then the spring would clamp the wire.

If you want to see all the kits, there is a site with scans of many old Radio Shack catalogs. This page and the next one are where I pulled the data for 1975. But there are other years, too. There were also other kits that didn’t use P-Box, including a bunch of PCBs for a buck or two for projects like power supplies and stereo preamps. That didn’t include other parts though, but — of course — you could buy them all at Radio Shack.

It is true you can get lots of beginner-level kits today. But many of them have tiny components, ICs, or rely on some complicated “magic chip” (a preprogrammed IC). These projects were simple and useful and inexpensive.

They were also available. Heathkit, for example, had great kits with amazing manuals. Sure, they cost more, but they generally looked like something you bought ready-made if you built it right. On the other hand, the cheapest shortwave receiver in a 1976 Heathkit catalog was nearly $70. Sure, it looked like a real radio and probably performed better, too. But $70? Might as well have been a million for the kids buying P-Box kits.

Even if you had the money unless you lived near a Heathkit store — there were a few — you had to order something and that was a lot harder and took longer without the Internet. You probably sent a check, waited for it to clear, and then waited for the parcel to arrive. Maybe you were smarter and got a money order or placed the order COD (cash on delivery), but it was still going to take time.

Radio Shack, on the other hand, was right around the corner. Well… about 30 miles around the corner for me, because I grew up in the sticks. But it was very likely you lived within an hour’s drive of a Radio Shack. You could take your birthday money, go to the store, and have near-instant gratification. That counts for something when you are a kid.

If you wanted to build your own version of any of these kits, the Sparktron website has scans of most of the manuals. The handily have a schematic and a bill of materials for each kit in the manuals, of course. Usually, the parts list was with the layout that showed you where to put the parts. You might have to cross reference some Radio Shack part numbers, too. Here’s the schematic for the FM radio, for example. 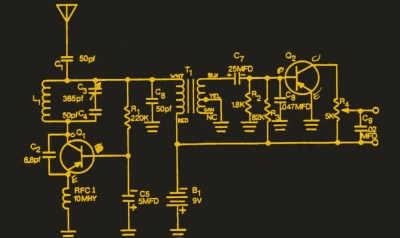 None of the kits were very complicated as they were meant for a kid to build in one or two sittings. Some of the parts might be a little hard to find, these days, but we’ve seen people manage.

The real question is what to build it on? You could use a piece of real perfboard, of course, but that seems like cheating. It would be near sacrilege to produce a PC board for them. It seems like it would be worth at least trying to make the perfboard red, as [Netzener] does (he’s rebuilt at least three P-Box kits in the modern day).

I’m afraid I don’t have any of the half dozen P-Box kits I built back in the day. But [robssk885] has one and he shows it off in the video below. If you want to see more, there is a gallery of contributed photos on the Sparktron site (towards the bottom).