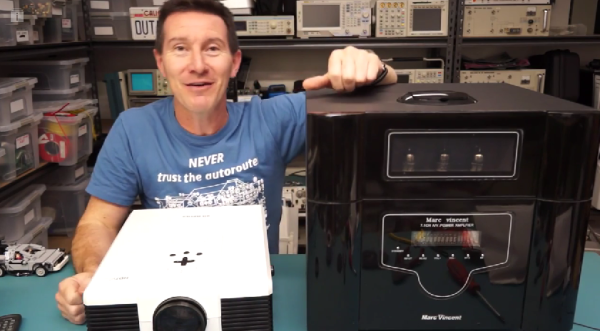 [Dave Jones] shows us just how bad audio equipment can get with his white van speaker scam teardown (YouTube link). Hackaday Prize judge [Dave] has some great educational videos on his EEVblog YouTube channel, but we can’t get enough of his rants – especially when he’s ranting about cheap electronics. Check out his world’s “cheapest” camcorder teardown for a classic example

This week [Dave] is tearing down some white van speaker scam A/V equipment. The White Van Speaker Scam (WVSS) is an international hustle which has been around for decades. A pair of guys in a white van stop you in a parking lot, gas station, or other public area. They tell you they’ve got some brand new A/V equipment in the back of their van that they’ll give you for a “great deal”. The speakers are always in fancy packaging, and have a name that sounds like it could be some sort of high-end audiophile brand worth thousands.

Needless to say anyone who buys this equipment finds they’ve been duped and are now the proud owner of some equipment which only sounds good when hitting the bottom of a dumpster. Coincidentally, a dumpster is exactly where [Dave] found his WVSS equipment.

The case of his “Marc Vincent” surround sound system turned out to be nothing more than thin chipboard hot glued together. The electronics were of such shoddy quality that few words describe them – though [Dave] is always ready to improvise. From the ultra cheap subwoofer driver to the 1990’s era vacuum fluorescent display, everything was built down to the lowest cost while still looking nice from the outside. Even the ground wire was just tack soldered to the frame. We especially liked the three vacuum tubes that weren’t even soldered in. The leads were bent over to hold them onto a PCB, while a blue LED lit the tube from below.

Click past the break to see what [Dave] found inside his “3D Optics” projector.