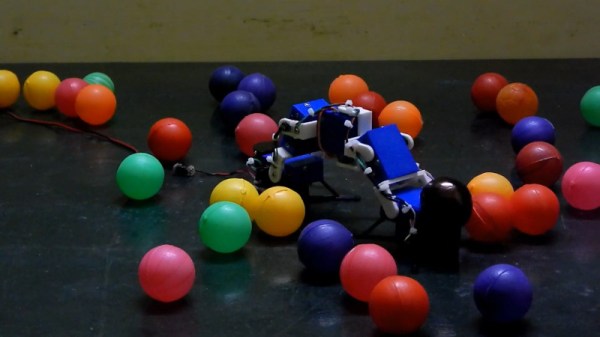 Robot locomotion is a broad topic, and there are a multitude of choices for the budding designer. Often, nature is an inspiration, and many ‘bots have been built to explore the motion regimes of various insects and animals. Inspired himself by the common inch worm, [jegatheesan.soundarapandian] decided to build a robot that moved in a similar way.

The build consists of a series of 3D printed linkages, with servos fitted in between. This allows the robot’s body to articulate and flex in much the same way as a real inch worm. By flexing the body up, shifting along, and flexing back down, the robot can slowly make its way along a surface. An Arduino Pro Mini is the brains of the operation, being compact enough to fit on the small robot while still having enough outputs to command the multiple servos required. Control is via a smartphone app, using MIT’s AppInventor platform and the venerable HC-05 Bluetooth module.

It’s a fun build, and we’d love to see it go further with batteries replacing the tether and perhaps some sensors to enable it to further interact with its environment. We’ve seen other creative 3D-printed designs before, too – like this spherical quadruped ‘bot. Video after the break.