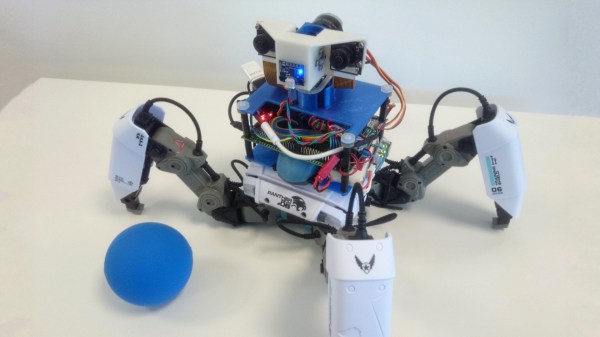 The Mekamon from Reach Robotics is a neat thing, a robot controlled by a phone app that walks on four legs. [Wes Freeman] decided to hack the platform, giving it a sensor package and enabling some basic autonomous behaviours in the process.

[Wes] started out by using a packet sniffer to figure out the command system for controlling the Mekamon robot over Bluetooth. Then, he set about fitting a Raspberry Pi 3 on the ‘bot, along with a Pi Camera on a gimballed camera head.

Running OpenCV on the Raspberry Pi gives the Mekamon robot the ability to follow a colored ball placed in its field of vision. Later work involved upgrading the hardware to a Pi Compute Module 3, with its dual camera inputs allowing for the use of a stereo imaging setup.

All the parts simply ziptie on top of the original robot, with no permanent changes needed. It’s a neat way of hacking, by expanding the original capabilities without actually having to tamper within.

We’ve seen plenty of autonomous builds over the years, from farming robots to those designed to explore the urban environment. Video after the break.