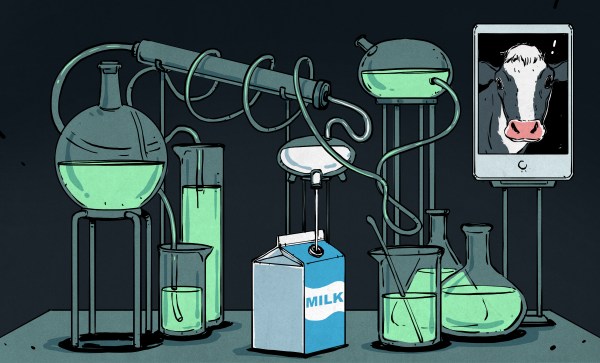 You’ve no doubt heard of the many alternatives to cow’s milk that are available these days. Perhaps you’ve even tried a few of them in your quest to avoid lactose. Some coffeehouses have already moved on from soy milk, offering only oat or almond milk instead of 2% and whole. Their reasoning is that soy milk is a highly processed product that can’t be traced back to a single source, which stands in stark contrast to all those bags of single-origin coffee beans.

These nut-based alternatives kicked off what is known as the milk wars — the dairy industry’s fight against labeling plant-based dairy alternatives as ‘milk’ and so on. Well, now it’s getting even more interesting. A company called Perfect Day is making milk using microorganisms that secrete milk proteins. It may sound kind of gross, but it’s essentially microbial fermentation, which is the normal process by which bread, cheese, yogurt, wine, and beer are made.

To be fair, what Perfect Day and other companies are doing is precision fermentation using genetically engineered microorganisms in a bioreactor, so it’s a bit more involved than what you could probably pull off in the basement. Precision fermentation lies somewhere between two modern extremes — plant-based meat and cultured meat. The latter is actual animal tissue grown from stem cells, and is only available at high-end restaurants for exorbitant prices.