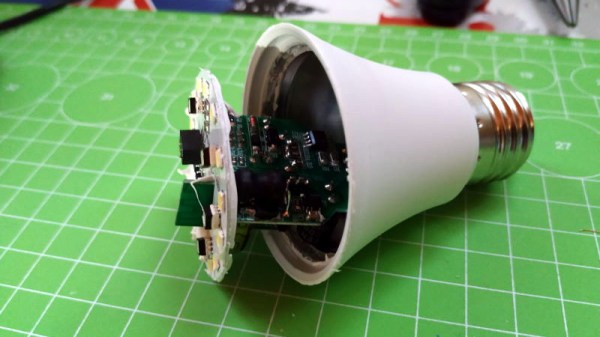 By now it’s a hardware hack that’s become common enough to be unremarkable, taking a smart light bulb or other mains switchable appliance and replacing its firmware with an open-source equivalent such as Tasmota. But what can be done when a new device is found to have a microcontroller unsupported by any open-source equivalents? If you are [Luca Dentella], you don’t throw in the towel and buy another one with a known processor, instead you reverse engineer it enough to give it a brain transplant of an ESP8266 module.

The Fcmila branded smart bulb in question was found to have a relatively unknown Chinese SoC, the Opulinks OPL1000. Since this couldn’t even raise a serial port it was more trouble than it was worth to write software for it, so instead he spent a while reverse engineering its schematic and electrical protocols, before grafting in a Wemos D1 ESP8266 board. He’s made a video about the project which you can see below the break.

Thankfully the majority of smart bulbs on the market seem to use more familiar hardware that can be flashed with relative ease.