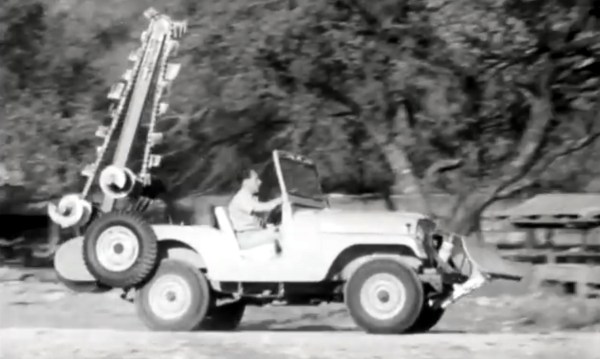 How often do we find ourselves thankful for advertising? When it comes to Hackaday’s Retrotechtacular column it’s actually quite often since it snapshots a moment in culture and technology. Today’s offering is a shining example, where we get a great look into vehicular utility of the day that is rarely seen in our modern lives.

The origin story of the Jeep is of course its prominence in World War II when more than half a million were produced. GIs who drove the vehicles constantly during the war greatly appreciated the reliability and versatility and wanted one for their own when returning home and a market rose up to satisfy that need. The modern equivalent would be the Hummer fad that started in the 1990’s. Humvee, the early ancestor of the Hummer, replaced the Jeep in the US military in the 1980’s and a version called Hummer entered the consumer market in ’92. But that was more of a comfort-meets-icon proposition, where the Jeep of the 1950’s (seen in the commercial below) delivered — even over delivered — on a promise of utility.

In this ad, the case is made for Jeep as farm implement, acting as plow, mower, even post hole digger. As a firefighting implement the announcer boasts that “One man with a Jeep can do the work of 100 men with shovels” by cutting fire breaks into the soil. It’s sold as the workhorse of cemeteries, ranches, county service crews, and anything else their marketing gurus could write into copy. We think the metrics are dubious but certainly the inexpensive build, versatile nature, and need for power equipment across the countryside brought these Jeeps into widespread rural and industrial service in myriad roles.

What makes most of this possible is the existence of a power take-off (PTO). This is a mechanical connection from the engine of the vehicle to external components that can be switched out. Once connected, the speed of the engine can be controlled to adjust the power take-off operation. In conjunction with a hydraulic system that can lift and lower the implement, it becomes a remarkably versatile system. We begin to wonder the American vernacular includes the saying “it’s like the Swiss Army knife of…” rather than calling everything that’s insanely useful a Jeep.

Connect a pump to the PTO and you have a fire-fighting Jeep. Connect a generator and you can drive electric tools like the chainsaw used to cut down a tree in the video and to power an arc welder. There’s a gnarly-looking circular saw blade, and you’re going to spill your coffee when you get to the “Jeep-a-trench”. That’s right, a trenching attachment gives the vehicle’s suspension a rough workout. It boasts the ability to dig down six feet and complete the footings for an ordinary house in just three hours.

Willy’s MB, the company behind the Jeep must have employed a crew of hackers. What a blast it would have been to be in the research and development sessions to come up with 1,001 more uses for the equipment. The company has a bit of Jeep history you can peruse, but we’d really love to hear about the addon equipment ideas that didn’t make the cut. Are there any readers who have some stories along these lines? Let us know in the comments below.

END_OF_DOCUMENT_TOKEN_TO_BE_REPLACED